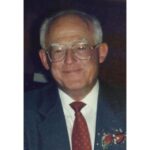 Dr. Morrow was appointed to the Mayo Clinic Staff as a consultant in General Internal Medicine in 1957 and retired in 1991. During this 34 year period, he was President of the Mayo Clinic Staff, the first recipient of the Parker D. and Isabella G. Sanders Professorship in Primary Care and served on the Executive Committee for the Board of Trustees of both Saint Marys and Rochester Methodist Hospitals. Dr. Morrow was Chair of the Division of Rochester Internal Medicine (1970-74) and of the renamed Division of Community Internal Medicine (1974-79). During these 9 years, the Division received confirmation for the General Internists of this Division to continue their role in the management of residents of Rochester and the surrounding area and, also identified the need for a separate health-care system designed for these resident patients. Following institutional approval, the Division was charged with the major responsibility for planning such a facility, the Baldwin Building, which opened Feb. 19, 1979. Additional activities included being a member and subsequently Director of the Lockheed/Mayo Feasibility Study to determine those aspects of medical care appropriate for computerization, Chair of the Committee to determine the feasibility of establishing Internships at Mayo and Vice Chair of the Admissions Committee at the start-up of Mayo Medical School.

His community activities included: Chair of the Southeastern Minnesota Chapter of the American Red Cross, Sunday School Superintendent at Christ United Methodist Church and he served on the Advisory Boards for the College of St. Theresa and the Rochester Community College.

George was preceded in death by his wife, Jean, the love of his life for 63 years.

Due to the circumstances surrounding COVID-19, a memorial service will be held at a later date in the Chapel at the Charter House in Rochester.