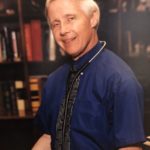 Dr. Gordon B. Arnold, 84, of Kernersville, formerly of High Point, North Carolina, went to be with the Lord on Tuesday, October 15, 2019.

Dr. Arnold was born on July 3, 1935, in Chicago, Illinois.  He worked as a physician for 54 years and as a Guilford County medical examiner for 47 years.  Dr. Arnold will be remembered for his unwavering devotion to Christ, his sincere dedication to his patients, and his steadfast love of both family and country.

He attended high school in Duluth, Minnesota, and graduated from Northwestern School of Medicine.  Dr. Arnold completed his residency in internal medicine at the Mayo Clinic in Rochester, Minnesota.  During the Vietnam War, he served as a Lieutenant Commander in the United States Navy. In 1969 he relocated to High Point and began a lifetime of serving the community.

Dr. Arnold was preceded in death by his parents, George and Clarice Arnold, and his brother, Richard Arnold.

The funeral will be conducted at 11:00 AM Saturday, October 19, 2019, at Green Street Baptist Church in High Point. Dr. Paul Fowler will preside over the service.  A private burial will be held later on Saturday.

The family will receive friends from 6:00 PM until 8:00 PM Friday in the fellowship hall of Green Street Baptist Church.

Memorials in honor of Dr. Arnold’s life may be sent to Ligonier Ministries of Sanford, Florida, or The Jesus Film Project of Cru Ministries, Orlando, Florida.

Condolences may be expressed online at www.wrightfs.com.

Wright Funerals-Cremations is in charge of arrangements.