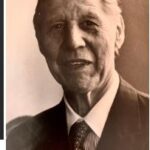 J. (Joseph) Gordon Millichap, MD, FRCP, born on December 18, 1918 in Wellington, Salop, United Kingdom, to Joseph and Alice (née Flello), died peacefully at home in Chicago, IL on May 7, 2021. Dr. Millichap was preceded in death by his first wife, Mary (née Fortey) who died in 1969 and his second wife, Nancy (née Kluczynski) who died in 1995, as well as by his brother and sister. Dr. Millichap is survived by his four sons Martin (Patricia), Paul (Joan), Gordon, and John (Maria), as well as six grandchildren Christopher (Stephanie), Whitney (Erik), Lindsay, Jeremy, Nina, and John, and two great grandchildren Oliver and Conor. Additional survivors include three sisters-in-law, as well as a number of nephews and nieces.

Dr. Millichap was a Professor Emeritus of Pediatrics (Neurology and Epilepsy) at Northwestern University Feinberg School of Medicine. He was a nationally and internationally recognized expert in the treatment of epilepsy, attention deficit disorder, learning disabilities, and other neurological disorders of children and adolescents. He was also a member of numerous professional medical societies and associations, as well as editor, editorial board member, and consultant for a number of neurological and pediatric journals.

Dr. Millichap received his MD (1950) from Saint Bartholomew’s Hospital Medical College (now Barts and The London School of Medicine), University of London, and residency training at Great Ormond Street Hospital (1951) and Barts (1953). He completed his fellowship in Pediatrics at Boston Children’s Hospital in 1954 and his fellowship in Neurology at Massachusetts General Hospital in 1959.

Dr. Millichap was one of the first pediatric neurologists in the U.S. He established pediatric neurology training programs at the Mayo Clinic (1961) and Children’s Memorial Hospital, Northwestern University (1963) with a grant from the NINDB, and subsequently at Southern Illinois University (1989). In the mid-1960’s he established a successful private pediatric neurology practice in downtown Chicago, which he operated for approximately 20 years. He later became an honorary consultant at Great Ormond Street Hospital for Children in London, UK. He ultimately returned to the Division of Neurology at Children’s Memorial Hospital (now the Ann and Robert H. Lurie Children’s Hospital of Chicago) where he continued his academic and clinical activities until his retirement in 2015. Dr. Millichap was particularly proud and gratified that his youngest son, Dr. John J. Millichap, followed in his footsteps and currently serves as an Associate Professor in the Department of Pediatrics (Neurology) at Lurie Children’s Hospital.

Dr. Millichap authored over 150 peer reviewed publications and several books on neurology, epilepsy, attention deficit disorder, and learning disabilities. He was the founding editor of “Pediatric Neurology Briefs” (PNB) in 1987, an international review journal of current research in child neurology. In 2012, PNB became a Publishing Partner with the World Health Organization’s HINARI program and EIFL benefiting clinicians and researchers worldwide. Dr. Millichap’s love of writing also included published books related to health, nutrition, and the environment, as well as landscape architecture, the latter work (“The School in a Garden”) reflecting an interest cultivated as a child by his own father, a master landscape gardener and designer in Wellington, England.

Dr. Millichap served as a Squadron Leader, Medical Specialist in the British Royal Air Force Medical Service (RAFMS) from 1948-1950 in Habbaniya, Iraq. He immigrated to the U.S. with his wife Mary and their two sons in 1953. In 1964 he and Mary became naturalized U.S. citizens, where at a ceremony following his induction in Chicago, Dr. Millichap was recognized as the outstanding new citizen of the year.

Dr. Millichap enjoyed a long, eventful, successful life full of purpose and achievement. Professionally, his work touched the lives of many students, associates, and colleagues and brought hope and relief to countless more patients and their families. His drive and dedication to the field of medicine allowed him to continue seeing patients well into his 96th year, a feat made possible in no small part due to the loyal support of the staff at Children’s Hospital.

Among his family, Dad/Grandpa/Great-grandpa/Gordon/Uncle Gordon will be remembered for a multitude of reasons, acts, and moments including his generosity and hospitality, his interest in fine art, antiques, literature, and classical music, his fondness for a well prepared meal shared with others engaged in friendly conversation, and in younger years his time spent in the garden tending his rose bushes and being with his family at his summer home in Lake Geneva, WI where he enjoyed playing a round of golf and taking his boat out for a ride around the lake. Sail on Dad.

Funeral services were conducted during a family graveside service at Graceland Cemetery in Chicago on May 12, 2021. The family would like to thank the staff at LLP Health Care Services of Illinois for providing in-home care to Dr. Millichap during his later years.