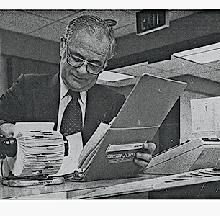 BYNUM JR., Dr. Grover L. Following 91 years of friendship, laughter, and service, Dr. Grover L. Bynum, Jr. left this earthly sphere on January 29, 2019. He was married to Anita Schneider for almost 60 years and father of Deborah, Belinda, Grover III, and Thaddeus. Thaddeus preceded his father and is doubtless appreciative of the companionship, if not the supervision, upon the Doctor’s arrival. Grover touched the lives of countless individuals. He held a combination of professional skill, empathy, humility, good humor, and regard for his fellow humans. Convening meetings on his varied personal and business interests long past closing time, Dr. Bynum was “on call” throughout his long life and busy career. He was also on call for his family and long, long, long list of friends. There are too many tales of companionship and celebration to list but they will no doubt be revisited many times over the next days, months, and years. Nothing would make him happier. Born in Henryetta, Oklahoma, to Grover Sr., attorney and occasional politician, and Lady Clare, decorous town librarian, Grover was raised under the watchful eyes of four sisters. Helene, Natalie, Patricia, and Elinor were ever vigilant that he met his full potential. He loved his sisters and was devoted to them and their families, whom he loved and worried about as his own. In high school, Grover thrilled his hometown as the “willowy wisp of gold” star quarterback for the undefeated 1942 Henryetta Fighting Hens football team. Throughout his life, his athletic abilities often confounded his peers with victories after years away from the game at hand. Grover attended Tulane undergrad and medical school in New Orleans alongside lifelong friends. He was a member of Phi Kappa Sigma and Nu Sigma Nu fraternities. For decades, annual Cadaver Table reunions were held around the country. It’s unclear what these events entailed but the Bynum progeny remain intrigued. As a young man, he served his country in the US Navy and, after medical school, the US Air Force. During his fellowship at Mayo Clinic in Rochester, Minnesota, he met school teacher Anita Schneider. He asked her father for her hand over a pheasant hunt at her family farm. The addition of this loving and caring family to his life brought great joy to him over the years. Dr. Bynum was recruited from the Mayo Clinic by Central Texas internal medicine pioneers (and also Mayo Fellows) Charlie Darnall, Horace Cromer, and Frank Pearce to establish a modern practice in the venerable Capital National Bank building (now the Norwood Tower) in downtown Austin. His favorite part of being a doctor was his patients and many became long time family friends. He continued making house calls long past industry standard, doctor bag in hand and with children often in tow. He also regularly made rounds at the various hospitals around town, following up on patients’ care and their families. Along with patient care, Grover was committed to his profession, its support of community, and providing equality, equity, and access to health care. As President of the Doctor’s Building Corporation, Dr. Bynum and Capital Medical Clinic were instrumental in the creation of Austin’s first medical district, when CMC moved from downtown to West 38th Street, followed shortly by the building of Seton Medical Center and Shoal Creek Hospital. Although the group was committed to modernizing Austin’s medical landscape, they remained true to their roots. Dr. Bynum’s office had the only window that opened, so these health crusaders would gather there after hours to smoke cigars and plan for the future. Dr. Bynum served as Chief of Staff to both Seton Medical Center and Shoal Creek Hospital. He served on the Health Services Advisory Board which supported 30 counties in Central Texas. Participating in professional organizations was also an important part of his involvement in the medical community. He was a long time member of the American Medical Association, the Travis County Medical Society, the Texas Medical Association, the American Cancer Society, the Texas Cancer Council, and the Texas Club of Internists. As his friends and family aged, he expanded his commitments to include the American Geriatric, Southern Medical Geriatric, and Texas Geriatric societies. Grover was involved in several cultural and civic organizations over the years, some of which he out lived. He was a charter member of Tarry House and an active member of West Austin Rotary, Knights of the Symphony, Admirals Club, and Headliners Club. With Anita, he was an enthusiastic support of organizations including St Martin’s Lutheran Church, Settlement Club, Sewing Club, and PEO. The family wishes to recognize Grover’s steadfast respect for Austin’s medical community, the Capital Medical Clinic, and the family, friends and mentors that filled his life. There is a story and smile for each and every one and many, many more. There will be a service at St. Martin’s Lutheran Church on Tuesday, February 19, 2019 at 1:30 PM. Following the service, there will be a reception at Tarry House from 3 to 5 PM. In lieu of flowers, the family encourages those so inclined to join the Doctor’s lifetime support of Seton Hospital, the American Cancer Society, or a charity of your choice. For additional obituary information and to leave remembrances, please go to www.wcfish.com