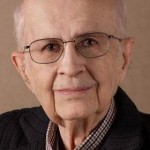 Guy Whitehead was born in Jellico, Tenn., on July 20, 1920, to Guy and Lucile Rutledge Whitehead. After some years of movement for his father’s profession in education, Guy grew up in Richmond, Ky., where he graduated from Eastern Kentucky University in 1941. Having an ROTC commission in the field artillery, he entered active service. He married Almyra Shipley in Cookeville, Tenn.,  in 1942. After serving in the U.S. and Europe until 1946, he used the GI bill to earn a Ph.D. in English from Vanderbilt University.

After teaching at the University of Kentucky until 1956, he joined Mayo Clinic staff as an editor in 1956, and continued so until retirement in 1984. He was active in the American Medical Writers Association, principally as a teacher of workshops, and received its highest honor, the Swanberg Award, in 2004.

He was preceded in death by his wife, Almyra in 2009, and is survived by their children, Guy (Julie Ann Carson) Whitehead, M.D., of Portland, Ore., and Amelia (Don Dryden) Whitehead of Nashville, Tenn.; and his sister, Anne Whitehead White of Cincinnati, Ohio.

A memorial service will be held in the spring at Calvary Episcopal Church in Rochester.