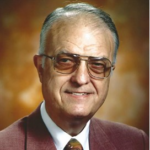 It is with deep sorrow that we announce the death of Gyman Clare Okeson of Belton, Texas: physician, husband, father and beloved child of God.  He died at 85 years of age, surrounded by his family, whom he loved and who loved him.  Gyman was born on July 16th, 1936 in Minot, North Dakota, and grew up about an hour’s drive away in the town of Parshall, where his parents, Clarence and Nora, owned and operated a movie theater.  Before the Great Depression, his mother trained as a classical concert pianist and his father played drums for a touring dance band, and so it surprised no one that Gyman showed a love and aptitude for music from an early age.  He became well versed on many instruments of the woodwind family, his favorite being the saxophone.  He also played the accordion and was an accomplished pianist.  But the Depression was a hard teacher, and his parents encouraged their son to get a “real” job and play music on the side.

Gyman graduated from Parshall High School in 1954.  He received a Bachelor of Science in 1958 and a Master of Science in 1960, both from the University of North Dakota in Grand Forks.  And in 1962 he received a Doctorate from Baylor University School of Medicine in Houston, Texas.  The summer before he transferred to Baylor, he was introduced to Violet Drees at a dance and fell in love.  Gyman proposed to her during Christmas break in 1960 and they married the following September.  After Medical School, Gyman took a one-year internship at Marion County General in Indianapolis followed by one-year residency at St. Luke’s in Fargo, before moving to Williston, North Dakota, where he worked in private practice at the Craven – Hagen Clinic.   In 1966, he moved to Rochester, Minnesota to complete his Internal Medicine Residency, followed by a two-year Pulmonary Fellowship at the Mayo Clinic.  These were busy years; Gy and Vi’s first son was born in Indianapolis, and their second and third sons in Rochester.

In January of 1970, Dr. Okeson joined the Division of Pulmonology at Scott & White Hospital and Clinic in Temple, Texas.  He was instrumental in creating one of the first pulmonary function labs in the country and served as its Medical Director, the Director of Pulmonary Rehabilitation and as a member of the Laboratory Advisory Committee.  While he enjoyed seeing patients, his lab work held a special place in his professional life.  His research, in collaboration with other staff, was published in many national scientific journals.  He also served as Quality Assurance Coordinator for the Scott & White Board of Directors from 1982 until 1996.  And when the Texas A&M University School of Medicine opened its Temple campus in collaboration with Scott & White, Gyman added Professor to his many responsibilities.  Gyman was an American College of Chest Physicians Fellow; an active member of the American Thoracic Society; and a member of the Texas Thoracic Society, including two years as its President.  He belonged to the American Lung Association of Texas and served on their Board of Governors from 1985 until 2003 and for a time as their President.  He belonged to the Bell County Medical Society, serving as their President in 1983 and was the recipient of their Silver Stethoscope Award in 2002. He was also a member of the American College of Physicians, the American Association for the Advancement of Science, the Central Texas Research Society, the American Medical Association, the American Association of Cardiovascular and Pulmonary Rehabilitation, and an associate member of the Sigma Xi Research Society.

Gyman was baptized and confirmed into the Lutheran Church.  When the Okeson family moved to Temple, they were briefly members of First Lutheran Church, but soon joined St. Francis Episcopal Church, which was their religious home for two and a half decades.  Gyman regularly sang in the choir.  He had a warm baritone voice and was, for several years, a soloist in the church’s annual production of The Messiah.  He also served two, non-consecutive, three-year terms on the vestry.  For the past two decades, Gyman and Violet have been members of Christ Episcopal Church and Gy and his son Philip also participated in a weekly non-denominational men’s bible study.

Despite long hours spent at work, Gyman had many hobbies.  He followed his parent’s advice and played music “on the side” whenever he could – both at home and as a member of various bands including The Notocords in Rochester, the Central Texas Dixieland Band and in his later years with a The James Gang.   Gyman was an avid amateur astronomer and some of his observations on double stars were published in the journal Betelgeuse.  He was a member of the National Deep Sky Observers Society and for several years authored a regular feature called Doubletalk in their journal, The Deep Sky. He had a fascination with photography, beginning in his teens, when he would sometimes experiment with double exposure for dramatic effect.  One of his first paying jobs was as a photographer for a local business in Parshall.

Gyman was a member of the Temple Lions Club and among other roles, served as the official photographer for the Lions Club Follies from 2012 through 2017.  He enjoyed working with his hands.  He built toys for his sons.  He built a roof for the patio.  He was a talented woodcarver.  He loved taking his sons, and later his grandsons, boating and fishing.  He loved telling jokes, especially puns.  He believed a good pun made you laugh but a great pun made you groan.  But the thing he enjoyed most was taking his wife dancing.  He loved that most of all. Dr. Okeson retired from active medical practice at Scott & White in 2001, but for several years afterwards he volunteered his services at the Temple Community Free Clinic.

In 2004, Gyman became a Master Gardener and his seminars on Rainwater Harvesting and Composting were in demand with gardening groups across Central Texas.  He was President of the Board of Directors for the Bell County Master Gardeners Association from 2006 to 2008.  In his last years, Gyman remained active in church and with Bible Study.  He enjoyed telling jokes with friends at Whiskey Wednesday events, and prior to the pandemic, he played saxophone with The James Gang two or three times a week.  He liked to work in the yard, watch Fox News and spend time with family.  And at 85, he still loved to twirl his wife around the dance floor.

Gyman is survived by his wife, Violet; three sons, Stephen and his wife, Karen of Frisco Texas, Philip of Belton, Texas and Gregory of San Antonio, Texas; and two grandsons, Zachary and his wife, April of Plano Texas and Dakota of Lewisville, Texas.

He was preceded in death by his parents, Clarence and Nora.

The family suggests memorial donations be made to either Scott & White Memorial Hospital or Christ Episcopal Church, both located in Temple, Texas.