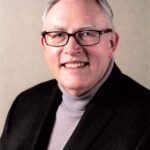 He was born January 25, 1944, in Riverside, CA before his father was sent to invade Okinawa. After his father’s return, Bert was lucky to have a happy childhood in Louisville, KY as the big brother to two little sisters. The family motto was, “Try to do your best.” He was molded by his family, school, church, and Boy Scouts.

His family moved to Minneapolis in the middle of his Junior year, where he graduated from Washburn H.S. in 1962. He began to believe in equal rights for all people, working for the common good, and trying to work with people to try to find practical solutions to complicated problems, rather than trying to impose simple solutions or moral judgements that almost always seemed to him to be the wrong answer.

In 2002 Bert and Jane returned to Rochester upon Bert’s retirement. In retirement, he struggled with golf at RGCC but he enjoyed it. He was also active at St. Luke’s Episcopal Church, singing in the choir, serving for many years as a student mentor at Sunset Terrace School, volunteering in the Sunset Terrace backpack program to provide food for students over weekends, and other activities as able. Working out, sometimes more, sometimes less at the Rochester Athletic Club was a constant. Participating in three different book groups kept him reading. Yard and snow work and keeping his woods was a big job until he and Jane moved to Charter House in 2016. A final pleasure was to visit daughters and their families as often as possible and travel with each of his eight grandchildren on special trips to Europe.

A memorial service will be held at 10:00 AM on Saturday, March 19, 2022, at Ranfranz and Vine Funeral Home, 5421 Royal Place NW, Rochester, MN. The Rev. Justin Chapman will officiate. Visitation will be held one hour prior to the service, starting at 9:00 AM. Interment will be in Union Cemetery, St. Paul, MN, at a later date.

In lieu of flowers, memorial donations may be made to a charity of your choice. Ranfranz and Vine Funeral Home is honored to be serving the Reiman family; to share a special memory or condolence please visit www.ranfranzandvinefh.com