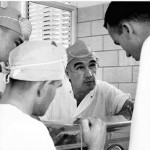 Hugh B. Lynn, M.D., formerly of Middleburg and The Plains, Virginia, died peacefully in his sleep at his home at Shenandoah Valley Westminster Canterbury in Winchester, Virginia, on November 10, 2015, with his wife, Lillian, at his side. He was 101.

Born in Verona, New Jersey, on August 13, 1914, Dr. Lynn was graduated from Blair Academy, Princeton University, (where he played shortstop for the baseball team) and the Columbia University College of Physicians and Surgeons.

He served in the United States Army from 1941 to 1946 and attained the rank of major.

He was a member of the first generation of surgeons who dedicated their careers to pediatric surgery. He pioneered a number of experimental surgeries for children born with severe birth defects and developed techniques specialized to childhood needs, many of which are still in use today.

In 1959 he convened a small group of pediatric surgeons and their spouses from around the country in Louisville to discuss their cases and share their experiences. That organization continues today as the Lilliputian Surgical Society and will hold its fifty-sixth annual meeting in 2016 in Louisville, the city in which it was born.

An accomplished horseman, Dr. Lynn foxhunted for many years with the Orange County Hunt in Fauquier County, Virginia, and served for a time on the Board of Trustees of that organization.

Memorial contributions may be made to the Aldie Presbyterian Church, P.O. Box 74, Aldie, Virginia 20105.

Known for his bow ties and fondness for a good martini, he will be remembered as well for his quick wit and grammatical precision, as well as his love of reading and the company of family and friends. He was a caring physician, husband, father, grandfather, and friend. He will greatly be missed.