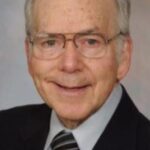 Jack David Grabow, M.D., 90, of Rochester, passed away Feb. 27, 2020, at Charter House in Rochester, shortly after being hospitalized for congestive heart failure.

Jack lived a wonderful, long life and will be sadly missed by his four children, Reed (Mary) of Redding, Calif., Theodore (Helene) of Baltimore, Md., and Nancy and Caroline (Marcelo), both of Minneapolis; and three grandchildren, Spencer, Ana and Sasha.

He was preceded in death by his loving wife, Gloria; his parents, Alex and Eva Grabow; and two sisters, Claire Lewis and Bernice “Bunny” Steinman. He is survived by his sister, Lora Schlesinger of Los Angeles.

Jack was born on Dec. 7, 1929, to Alex and Eva Grabow in Hartford, Conn. He grew up in Newton, N.J., where a visit to a hospital after breaking his leg playing football sparked his interest in medicine and immediately changed his vocational aspirations from wanting to be a pilot to being a doctor. Jack’s optimism, steadfast determination, and ability to find life’s silver linings continued to propel him throughout his life and professional career.

Jack received a Bachelor of Science degree from Rutgers University in 1951 and went on to graduate school, studying genetics at Columbia University in New York. In 1952, he entered medical school and subsequently received his medical degree in 1956 from the State University of New York at Buffalo Medical School.

While completing his medical internship at the University of Minnesota Hospital (1956-1957), Jack met his wife, Gloria Lund, near the university campus, where she was taking classes while also working in Minneapolis. Jack was accepted as a fellow in Mayo Clinic Graduate School in 1957, where he completed fellowships in both internal medicine and neurology.

In 1961, Jack and Gloria were married at Temple of Aaron Synagogue in St. Paul. Shortly after getting married, the couple moved to Japan, where Jack was stationed as Lt. Commander, serving two years as a military neurologist at Yokosuka Naval Base. Jack and Gloria opted to live off the naval base, where they could assimilate with the people and culture of Japan. They made many lasting friendships and were able to enjoy two return visits.

Upon returning to the States, Jack completed a National Institute of Health sponsored fellowship at Mayo Clinic Section of Electroencephalography (EEG) from 1963-1964. Jack and Gloria settled in Madison, Wis., where Jack was the director of the EEG labs at the University of Wisconsin Medical Center and associate professor of neurology at UW. Jack and Gloria’s four children were all born in Madison, where they lived for six years before moving to Rochester.

In 1970, the family moved to Rochester when Jack was appointed consultant in the Section of EEG at Mayo Clinic and later became professor of neurology in 1982. Their new life in Rochester enabled them to build a Taliesin-style house of their dreams on a wooded lot where they would raise their family. During the summer months, Jack enjoyed spending weekends with his family at his cabin on Pelican Lake, where he pursued one of his other passions in life, walleye fishing. These summers at the lake provided lasting memories and traditions that are still honored by the family today.

Throughout his life, Jack was curious to learn about other cultures and loved connecting with people from all over the world. He shared this love for travel and exploration with his family. He participated in two tours with the People to People International Citizen Ambassador Program, visiting medical centers, and sharing anecdotes with other neurologists in the Netherlands, Denmark, East Germany, Czechoslovakia, England, China and Mongolia.

After Jack retired from Mayo, he accepted a position at the University of Washington, as professor of medicine and director of Clinical Neurophysiology Laboratories, where he monitored the electrical activity of the brain during epilepsy and tumor surgeries.

Although Jack retired from Mayo Clinic in March 1992, he stayed active in the medical community. Jack truly relished being a lifelong learner; he continued to attend medical meetings in several specialties, participated regularly in a neuroscience course, and remained a regular at Grand Rounds up to his final days. His many past research interests included, cerebral dominance for language by electrophysiological techniques, electroencephalography in epilepsy, head trauma and post-traumatic epilepsy, memory testing, cerebellar physiology, auditory evoked potentials, slow virus, animal models of epilepsy, and the Comprehensive Epilepsy Program for the State of Minnesota.

The family wishes to extend their gratitude to the staffs at Saint Marys Hospital and Charter House who provided outstanding medical and supportive care for Jack.

A memorial service honoring Jack will be held 11 a.m. Monday, March 9 at the Charter House Chapel in Rochester, 211 Second St. NW. Interment will be at Fort Snelling National Cemetery in Minneapolis at a later date.