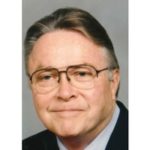 Dr. James C. Hunt, 87, formerly of Washington, IL passed away Tuesday, December 19, 2017 at Lutheran Hillside Village where he made is home.

Dr. Hunt was a radiologist in the Peoria Area for 35 years, retiring in the December of 1994. He was on the active staff of Proctor Hospital, serving as staff president in 1970, Chairman of the Department of Radiology from 1971-1995 and served as clinical assistant professor of Radiology at the University of Illinois College of Medicine, Peoria.

Dr. Hunt was a member of numerous medical and radiological associations. He was elected to the fellowship in the American College of Radiology and was past president of the Illinois Radiological Society.

In 1965 he served as a volunteer radiologist on the Hope Ship in Guinea, West Africa.

Jim was an Eagle Scout, member of the order of the Arrow and was a delegate to the Wold Boy Scout Jamboree of 1947 in France.

He was a member of St Mark’s Lutheran Church of Washington, IL where he sang in the choir for over 35 years and also served a term on the church council.

Jim was a kind and gentle man who loved the arts, music, travel and nature.

Cremation has been accorded and the memorial service will be held at 11:00am Friday, December 29, 2017, at St. Mark’s Lutheran Church in Washington. Pastor Dick Hanson will officiate. The family will receive friends one hour prior to the service.