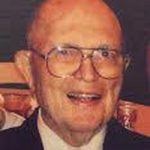 James Kearney Wise, 89, passed away November 18, 2016 at his home in Fort Collins, Colorado surrounded by family and friends.

Jim was born and raised in Cherokee, Iowa to James and Inez Wise on October 28, 1927. At 17 he left Cherokee for the University of Notre Dame, where he became a life-long Fighting Irish fan. After graduating in 1949 Jim continued his studies, earning his medical degree from the University of Iowa. While at Iowa he met the love of his life, Julie Hamill, who he married in 1953.

Following an Internship at Denver General Hospital Jim served in the Airforce working at the hospital in Midwest, City Oklahoma. He then went on to do his Surgery Fellowship at the Mayo Clinic in Rochester, Minnesota and was on staff there until his move to Fort Collins, Colorado in 1961.

Jim joined Stan Henson in founding one of the first surgical practices in northern Colorado. Jim was passionate about practicing medicine and helping others. It was often commented that Jim made everyone he came in contact with feel important, from all of the people he worked with to the patients he served.

Jim’s passion for helping others was evidenced by his volunteering as a medical doctor on the Ship Hope in Sir Lanka,(then called Ceylon) in 1968. He not only performed surgeries on the boat but assisted local doctors in their hospitals. He also volunteered his time in several other capacities in Fort Collins, including being the team physician for many years for Poudre High School.

In 1983 Jim went with Julie on Semester at Sea to serve as the ship’s doctor on the four month voyage around the world. This combined his passion for medicine and travel. Through the years Jim and Julie traveled extensively, visiting 5 continents and 57 countries. He shared many of these travels with his children and grandchildren and instilled the love of adventure in all.

Jim was a dedicated family man and made time with his family and friends his priority. He took the adage of “work hard play hard” to a whole new level. When in Fort Collins, it was hard to find Jim not working, but he would always find time to get away and take his family and friends on adventures and he always fit dancing into the mix.

Jim is survived by the love of his life, Julie Hamill Wise and six children: James Kearney Wise Jr,: Jane Wise-Gronewoller her husband Paul and four children, Peter, Shanan, Alex, Patrick: Joseph Wise and his wife Nancy and son Jim; Julie Wise Ryan and her husband Dan and their children, Daniel, Sarah, Megan and Keenan; Ann Wise Ghent and her husband Bob and their children Erick and Sara; Susan Wise and her daughter Alexis. Jim is also survived by his two sisters Meg Wilkinson and Dinny Phipps and many nieces and nephews.