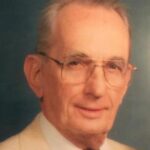 Memphis – James Clarence Harrell Simmons, 92, passed away peacefully on September 7, 2019 at Allen Morgan Health & Rehabilitation Center.(Hal, Jim, Doc) was born on November 17, 1926 to Clara Julia Harrell and William Thomas Simmons in the Binghampton community of Memphis. The family moved to Stuttgart, Arkansas when Hal was 6 where Mr. Simmons opened a dry goods store and Mrs. Simmons was the librarian at Stuttgart Baptist Church. Hal was a very adventurous, inquisitive young man and during middle and high school he hitchhiked to Mexico and Canada to” see the world “. After graduating from Stuttgart High School at age 15 Hal attended Ouchita Baptist College for 2 years and enlisted in the Navy Air Corp(WWll) as a Cadet as soon as he was eligible at 17. His preflight & flight training began in Monticello, Arkansas then the University of Texas in Austin & The University of North Carolina Chapel Hill. As Jim always stated “at the end of six months there Hitler, Mussolini & Tojo heard I was coming so they gave up and WW II was over!” He promptly returned to Ouchita to complete his education. Jim enrolled in The University of Arkansas School of Medicine, a member of Phi Beta Pi Medical Fraternity, where he earned his medical degree during which time he met & married Vanita Marguerite Rhodes Jones, of Rison, his wife of 67 years. He joined the Army as a 1st Lt. medical officer and began his internship during the Korean War at Walter Reed Hospital in Maryland where their first son, Joseph Harrell was born. From there the family moved to El Paso, TX where he continued his internship at William Beaumont Hospital, Fort Bliss, where their second son, Thomas Burke was born. Upon completion of his internship, they moved to Seagraves where he practiced general medicine for 2 years and was co-owner of The Gaines County Hospital where he delivered their daughter, Laura Vanita. He was an active member of the Lions Club and Gaines County Sheriff’s Posse. From there, the family returned to Memphis so he could pay his own way through residency. He worked at John Gaston hospital for a year in general surgery and then at The University of Tennessee/Baptist Hospital for two years in neurology & neurosurgery. After 3 years, Doc was accepted at The Mayo Clinic in Rochester, MN for a year where he studied Neurology and returned to Memphis to complete his residency in Neurosurgery at Semmes Murphey Neurological Clinic. Dr. Simmons was invited to become the 5th partner of Semmes Murphey Clinic; the first resident to be accepted as a partner. He was the president of Cripple Children’s Hospital, founded the pediatric neurological surgery clinic at Le Bonheur, and was an affiliate at St. Jude. He had a true passion for surgery and always studied before major operations despite his vast knowledge and expertise of the procedure. He was always honest and forthcoming which gained him great respect with colleagues and patients alike. He was best known by his colleagues as a “hurry up & wait” kind of guy who seldom took the elevators, preferring to run up & down the stairs and halls. Over the past few years his colleagues have described him as ” never staying in one place for very long, an amazing Neurosurgeon & a truly loyal person. Dr. Simmons was Certified by The American Board of Neurological Surgeons and was affiliated with over 11 professional organizations. Dr. Simmons was the Chairman of the Muscular Dystrophy Association of America- Shelby County Chapter, Chief of Surgery at LeBonheur’s Neurological clinic & Chief of staff at Semmes Murphey neurological clinic. Jim & Vanita were faithful members of Eudora Baptist Church which was founded by his great grandfather, J B Canada in 1850. Jim was a deacon & choir member until it’s closure. After retirement Doc & Vanita enjoyed working on their farm in New Albany, MS., traveling to their home in Highlands, NC., fishing, and playing golf. Jim also enjoyed hunting, skiing, hiking as well as many other activities- (chocolate) Both he and Vanita loved their family, friends & The Lord. In 2010, they moved to Trezevant Manor where they enjoyed being with friends and moved to Allen Morgan until their deaths. Jim was preceeded in death by his parents Clara & Tom Simmons, wife, Vanita & sister, Carolyn Simmons Flynt. He leaves behind his brother, Dr. Bill Simmons of Benton, Ark, sons, Joe (Becky) of Highlands, NC, Tom (Cynthia) of Raleigh, NC, and daughter, Laura Martin (Paige) of Memphis, five grandchildren, Wes Simmons (Nancy) of Columbus, GA, Jordan Gilligan of Alphareta, GA, Bonnie Glueck (Jeff) of Nashville, Will Simmons(Becca) of Raleigh, NC, and Ashley Brown (David)of London, England, 11 great grandchildren, Emily, Kate, Emmett, Camden, Anderson Burke, Evelyn, Anna Kate, Benjamin, Bethany, and step grandchildren Michael and Matthew. The family would like to express their appreciation to all the staff and friends at Trezevant Manor, Allen Morgan, Primary Care Specialists, Comfort Keepers & Crossroads Hospice for their care, support, and commitment to both Vanita & Doc. So many names should be included, and we pray each individual knows how much each added to our lives! The family will have a private viewing Thursday, September 12, 2019 at 8:30, will receive friends from 9:00-10:00 with the service and internment from 10-11 at Memorial Park. In lieu of flowers the family requests donations can be sent to Le Bonheur Children’s Hospital, the Semmes Murphey Foundation, St Jude or the charity of their choice.