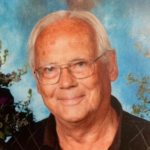 A memorial service will be held at First Lutheran Church of Bemidji on Friday, September 3rd, 2021 at 10:30 AM.

Jim was born in Fergus Falls, MN to Carl and Margaret Thompson on June 15, 1933. He was the eldest of four siblings and lived in Bemidji for almost his entire life. His sisters Ann, Judy and Cathy admired him very much, especially his wonderful sense of humor and funny stories about family and friends. He loved northern Minnesota and always claimed that it was the best place to be – near the water and woods.

He attended the Lab School, where he made lifelong friends with whom he undertook many later adventures, including hunting and fishing trips to Canada and even Alaska. In 1951, he graduated from Bemidji High School, where he lettered in football, but also ran track and picked up the tuba, a life-long passion. He received his Bachelor or Arts from Grinnell College in Grinnell, Iowa and later was a graduate of the University of Minnesota medical school, paying for his tuition working in construction, waiting tables, fighting fires and other odd jobs.

When he graduated from medical school, he interned at St Luke’s Hospital in Duluth and after working for two years at the clinic there, he moved to Bemidji to go into family practice. Shortly thereafter, he specialized in ophthalmology, taking up a residency at the Mayo Clinic in Rochester and afterward returned to Bemidji to start the ophthalmology office at the Bemidji Clinic, where he performed the first intraocular lens surgery in Bemidji.

He married Darlene Ann Olson in 1958 and built a house on Lake Movil where they lived with their three children, Beth, Sara and Brian. In 1976, about a year after his first marriage ended, he married Dorothy (Dot) Johanneson, nee Olson, the love of his life, with whom he enjoyed 45 wonderful years of marriage. It was important to Jim that they always live on or near a lake and have at least one dog. He started his own practice which Dot helped him manage and he later retired at age 64. After retirement, Jim was able to enjoy traveling abroad with Dot, taking more fishing and hunting trips and of course, playing the tuba. Prior to retiring, he played in the polka band Just Because and for 60 years with the Bemidji community band, earning the nickname “Tuba Jim”.

Jim was on the Northern Township Board because he was interested in improving Lake Bemidji’s water quality. In 2011, he ran for Bemidji City Council and served as the at-large member until 2014. He was reelected to the at-large seat in 2019 and served until he was forced to resign in June 2020 due to health challenges while at Nielsen Place.

Always a good storyteller and a proud Norwegian, Jim had a vast library of Ole and Lena jokes at the ready. He enjoyed sharing many stories about friends and the history of Minnesota and Bemidji, and was always an avid reader. His always calm and pleasant demeanor made him a wonderful partner, parent, doctor, bandmate and friend.

In Jim’s later years, a fighting spirit kept him going after his health began to decline. With Dot by his side, he attended City Council meetings, went fishing and took himself to the nearby Eagles club for lunch in his motorized chair, much to the concern of friends and neighbors. Behind his admirable composure and wit was always a formidable determination and it could certainly be said that he lived his life to the fullest.

Memorials can be made to the Minnesota Department of Natural Resources Future Forest Fund, United Way of Bemidji Area or Great River Rescue.