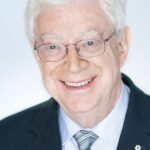 It is with great sadness that we announce the passing of an important pillar of the IRCM, Dr. Jean Davignon. On behalf of the IRCM community, we would like to extend our deepest sympathies to his family and loved ones.

Dr. Davignon was only 22 years old when he joined Dr. Jacques Genest’s group, even before the IRCM was founded. Then, a few years after completing his higher education abroad, he returned to Montreal in 1967 to start the IRCM Hyperlipidemia and Atherosclerosis Research Unit as well as the Nutrition, Metabolism and Atherosclerosis Clinic of Institute. He led this laboratory within the IRCM until 2018.

Dr. Davignon’s contribution to the world of research is undeniable. Professor of Medicine at the University of Montreal and Assistant Professor in the Department of Experimental Medicine at McGill University, he is also a co-founder of the Canadian Atherosclerosis Society and the Canadian Familial Hyperlipidemia Association. His important work on hereditary hyperlipidemias led him to identify a gene whose mutations are believed to be at the origin of many cases of familial hypercholesterolemia in Quebec. In addition, Dr. Davignon has led numerous clinical studies aimed at verifying the effectiveness of lipid-lowering drugs. He believed that “Harnessing basic research in the service of health, and relying on patients to advance discoveries was exciting.”

Dr. Davignon’s fame spread far beyond borders. A member of several learned societies, and in demand across the globe, he gave hundreds of lectures, and received numerous awards and distinctions, including an honorary doctorate from the Université Paul Sabatier in Toulouse (1992), the Frederick Newton Gisborne Starr medal of the Canadian Medical Association (1993), the Great Gold Medal for the centenary of the Institut Pasteur de Lille (1994), the Order of Canada (1995) and the Scientific Career Award of the Association of Physicians of French Language Canada (1996).

“Dr. Davignon is an exceptional model in terms of legendary curiosity, human qualities, and scientific excellence. He leaves us a considerable legacy that we will perpetuate. His memory will remain indelible at the IRCM for years to come, “says Jean-François Côté, President and Interim Scientific Director of the IRCM.