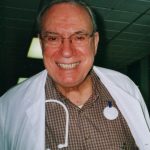 It is with great sadness that we announce the passing of Jean Abdallah Néemeh, on Friday, December 27, 2019 at the Jewish General Hospital in Montreal. Jean will be dearly missed by his loving wife Marie (Mimi) of 55 years, his children Alain (Nathalie Pilon) and Nadine, his grandchildren John-Anthony, Kiana, Justin and Julian, his sister Nawab and brother Rafik, his sisters-in-law, nieces, nephews, relatives and friends. Jean will rest in peace reunited with his children John Anthony and Debbie, and siblings Rouchdi, Antoine, Nadia, and Nohad.

He married in Egypt, immigrated to Canada in 1964, obtained his md and became a gifted hemato-oncologist, which, combined with his compassion for patients, helped save and extend many lives at Hôtel Dieu de Montreal, Ste-Jeanne d’Arc, and Santa Cabrini hospitals. Dad was a bon vivant, a poet and singer at heart, living life to the fullest and frequently the life of the party. He cheated death at the age of 47, following a massive heart attack which flat-lined him, and several other medical episodes throughout his life, benefitting from both his strong will to live and the many gifted doctors in Montreal, which allowed him to continue his passion for treating patients into his seventies. Special thanks to the medical staff who treated him at Sacré Coeur de Montreal, Hôtel Dieu de Montreal, the Montreal Heart Institute and most recently the Jewish General Hospital.

The family will receive condolences at: Centre funéraire Côte-des-Neiges, 4525 Côte-des-Neiges Road, Montreal on Thursday, January 2nd, 2020 from 2 to 5 and 7 to 9 p.m., and Friday January 3rd from 9:30 to 11am followed by a ceremony at 11:30 at the à la Chapelle de la Résurrection, thence to Notre-Dame-des-Neiges cemetery for interment. In lieu of flowers, a donation in Jean’s memory may be made to the Montreal Heart Institute Foundation or the Jewish General Hospital Foundation.