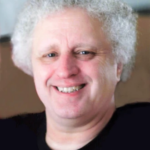 Jeff A. Sloan was a lifelong proponent for Quality of Life research. Unfortunately, his QOL suffered in the last months, up until he lost his battle with cancer on May 1, 2022. Jeff passed away peacefully, yet much too soon at the age of 62, in a serene setting at Seasons Hospice House in Rochester, Minnesota.

Jeff was born in Winnipeg, Manitoba, Canada. He met the love of his life, Vesna Kruc, in the band room of Sisler High School, when they were both 15. She became his wife 8 years later. Their first baby girl, Elizabeth, was born in 1990, and their second little sweetie, Marilyn, was born in 1993, in Winnipeg. Son, Alan, was born in 1996, a couple of months after the family joined Jeff in Rochester, Minnesota. Jeff’s pride and joy was his family. He was never happier than when they were around to go to the park, or spend an evening playing cards and games together. He loved his fuzzy buddies, the family puppers, Ryu, Loki and Kaia, and he was totally enamored with his sweet little chinchilla, Freya. Jeff had a larger-than-life persona, which was equaled by his 6’6”+ size. Jeff had a fun loving, gregarious personality that could hold the attention of a board room or a convention center full of people! It was often noted that he missed his calling by not becoming a comedian.

Jeff received his Masters Degree in Statistics in 1982, and after working for a couple of years, he went back to the University of Manitoba to pursue his Ph.D. Jeff earned his doctorate in 1991, then he worked in a variety of health related fields, most notably as an Adjunct Professor in the Faculty of Nursing at the University of Manitoba. When he was offered a position at Mayo Clinic, he went south to MN to check it out. He has been with Mayo for almost 27 years. Jeff was a Professor of Biostatistics and a Professor of Oncology. He was a Consultant of the Division of Clinical Trials and Biostatistics, Department of Health Sciences Research; Lead Statistician in the Division of Biomedical Statistics & Informatics, Department of Quantitative Health Sciences; and a Consultant (Joint Appointment) of the Department of Surgery – at Mayo Clinic, Rochester, Minnesota. Jeff has over 562 peer-reviewed published articles.