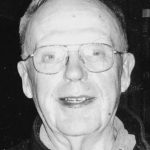 He was preceded in death by: his parents, John A. Cox and Mary (McCabe) Cox; sister, Etheldreda; and brothers, Lawrence Cox and Raymond Cox.

John served his country in both the Navy and Air Force. He graduated from Loyola University, Stritch School of Medicine, Chicago, and began his medical career as a General Practitioner, in Odell, Illinois. He later specialized in Psychiatry and Neurology, completing his residency at the Mayo Clinic, in Rochester, Minnesota, and later moved his family to St. Joseph, in 1967. There, he practiced psychiatry for 40 years, serving the mental health needs of the community.

The family conveys their appreciation for all the support given by friends and family members as well as the caregivers at LaVerna Village, in Savannah, Cameron Veterans Home, and Comfort Care Hospice, in Cameron, for their loving attention and care of John.

In lieu of flowers, the family requests contributions to Northwest Alzheimers Association or donors choice.