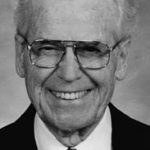 John Franklin Drumheller, 97, formerly of Erie, Pa., and Tequesta, Fla., passed away peacefully in his sleep July 25 at Arbors of St. Barnabas in Valencia.
He was born April 3, 1919, in Sunbury, Pa., to Frank and Anna Drumheller. He was married to Mary (Midge) Fulk, who died Jan. 14, 2016, from Danville, Pa.
John began his career in medicine after graduating from Temple University, completing a fellowship at Mayo Clinic under Dr. Benjamin Spock and then entering the Medical Corps in 1944, serving in France and Germany.
He practiced as a pediatrician in Erie, Pa., for 35 years. He was chief of staff at both Shriners Hospital for Children

and Hamot Hospital, and was a director of the Pennsylvania Blue Cross and Blue Shield for 20 years.
John retired to Tequesta, Fla., for 25 years, where he served as president of their condo association and an elder at his church. John enjoyed golfing, boating, fishing and always a good conversation.
He is survived by four children, Jack (Fran) of Port Orange, Fla., Susan Madeja (Steve) of Adams Township, Scott (Kristi) of Ponce Inlet, Fla., and Brad (Robin) of Erie, Pa. He also is survived by nine grandchildren and eight great-grandchildren.
DRUMHELLER – A memorial service for John Franklin Drumheller, who died Monday, July 25, 2016, will be at 10:30 a.m. Friday at SAUL-GABAUER FUNERAL HOME, 273 Route 68, Rochester, Pa., adjacent to Sylvania Hills Memorial Park Mausoleum.
In lieu of flowers, John would prefer a donation to the Shriners Hospital for Children

in Erie, Pa.
Online condolences may be offered at www.saul-gabauer.com.

Obituary courtesy of the Butler Eagle