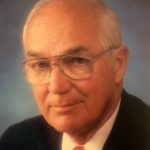 He was preceded in death by his precious son, Paul Griffith Turner; his parents; his sister, Sarah “Sally” McKelvey; and his brother, Walter “Bud” Turner II.

Following two years of service in the U.S. Army Air Corps, Dr. Turner graduated from Dartmouth College and Harvard Medical School. While studying Pediatrics at Boston Children’s Hospital, he met and married his wife, Carolyn, and then went on to do an internship at Boston City Hospital. Following a fellowship in General and Thoracic Surgery at The Mayo Clinic, he returned to Youngstown to open his practice. He later did extensive training at The Cleveland Clinic in cardiovascular surgery. Dr. Turner was considered a pioneer in his field, having performed the first open heart surgery in this area.

He was a member of the American College of Surgeons, the International College of Chest Physicians, Mahoning County Medical Society, American Medical Association, and an Associate Professor of Thoracic Surgery at Northeast Ohio College of Medicine.

Among his many accomplishments and honors, in 1996, Dr. Turner was presented the William S. Halsted Award from Western Reserve Healthcare for Dedication in the Art of Surgery. In 2000, he received the The Henry Holden M.D., Medical Leadership Award from Forum Health in Recognition of Excellence in Physician Leadership and Service to the Community. The John J. Turner Visiting Professorship/Fellowship was established in 2000, by ValleyCare as a special acknowledgment of his many contributions and years of service. In 2004, he was also recognized by the Mahoning County Medical Society with The Distinguished Physician Award. In 2014, the medical staff formally recognized him with the “Special Distinguished Service Award” for his significant contributions and outstanding commitment to Northside Medical Center and the field of medicine. He was widely published in medical journals and spoke extensively on treatment protocols for cancer of the lung. He maintained his practice for 50 years, and even after his retirement, he continued to teach and mentor surgical residents at Northside Medical Center. He recently chaired the Institutional Review Board, the Continuing Medical Education Committee and sat on the General Surgery Residency Clinical Competency Committee at Northside Medical Center. He taught in the surgical residency program from the day he started at the institution until this year.

Known for his wisdom and expertise, as well as his humble manner, Dr. Turner was well respected by his colleagues, the nursing staff, and highly regarded by the hospital residents. He was a very dedicated doctor and patient care was of utmost importance to him.

Beyond his professional life, Jake had many interests. He enjoyed many summers at his home on Cape Cod. He captained his own sailboat, sailing with his family on the East Coast and in the Bahamas. He enjoyed flying in small aircraft with his friends and decided to get his own pilot’s license, a remarkable achievement at age 77.

He loved theater and music and chose to sing at many of his children and grandchildren’s weddings. He was an avid reader and shared his love of reading with his family. He loved large family and friend gatherings and always delighted in sharing a glass of Chardonnay with loved ones.

Jake will be dearly missed by family and friends who hold an abundance of wonderful memories in their hearts.

A Memorial Mass will be celebrated on Saturday, Sept. 2, at 1 p.m. at St. Edward Church in Youngstown, with the Rev. Msgr. Robert J. Siffrin officiating.

In lieu of flowers, the family suggests that memorial tributes take the form of donations to The John J. Turner MD Memorial Fund for Resident Education in care of Western Reserve Health Education, 500 Gypsy Lane, Youngstown, OH 44501 to the attention of Dr. Kimberly Howe.

Obituary courtesy of The Vindicator