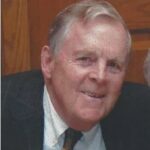 John (Jack) Miller, Jr., MD, went home to be with his Lord and Savior on February 26, 2022 due to complications from the Covid-19 booster. He was 87 years old and surrounded by his children at the time of his passing. The son of John and Mildred Miller, he grew up in New Castle, Pennsylvania where he met his future wife, Carole, in ninth grade. In his youth he became an avid golfer, a hobby which continued throughout his life.

Jack graduated from Penn State University in 1957 and Thomas Jefferson University Medical School in 1962. He completed his residency in Otolaryngology at the Mayo Clinic in Rochester, Minnesota in 1969. The draft interrupted Jack’s training and moved him and his young family to San Antonio, Texas and then Joppatowne, Maryland. Jack completed his military service at the Aberdeen Proving Grounds serving as an Army physician before returning to the Mayo Clinic to complete his residency.

Jack and Carole visited Lancaster County on the recommendation of friends from the Mayo Clinic and chose to establish their family and Jack’s medical practice here in 1969. At the time, Jack was one of two Otolaryngologists in Lancaster. Throughout his career, he cared deeply for his patients, their families, and his employees. Known for his lighthearted bedside manner, he touched many lives and is fondly remembered by many of his patients. He helped establish the Lancaster Surgery Center, creating a more cost efficient avenue of care for surgical patients in Lancaster. He practiced until 1998.

Committed to the community that was so dear to him, Jack served on the Advisory Board for the Salvation Army and donated his time to the Lancaster Cleft Palate Clinic. He was a member of St. John Neumann Parish, Lancaster Rotary Club, Lancaster Country Club, and the Hamilton Club.

Jack was kind of heart, generous, and often mischievous in spirit. Christmas gifts from Grandad always excited the grandkids and sometimes brought headaches to their parents. He was a committed family man who went to great lengths to express his dedication and love of family. This was notably demonstrated in his care for his beloved wife Carole, whose final years were stolen by dementia. He rose to the challenges of her illness, keeping her at home, and inspiring those around him with his devotion. His passing comes just two months after that of Carole.

Beyond family, Jack was passionate about golf. He was blessed and grateful to play some of the world’s most beautiful courses with family and friends, including St. Andrews, Ballybunion, Lahinch, Old Head, Augusta National, Pebble Beach, Bandon Dunes, and Pine Valley. In 1974, he was the runner up in the Lancaster Amateur, and on September 8, 1988, he won the Lancaster Senior Amateur, the same day his first grandchild was born. His friends on the golf course knew him as Bunky, a nickname he received from his mother as a young child.

Jack was predeceased by his wife, Carole, sister, Joan Gebert, and a granddaughter, Danielle.

Friends and relatives are respectfully invited to attend a Funeral Mass at St. John Neumann Church, 601 Delp Road, Lancaster, PA on Saturday, March 5, 2022 at 11AM. The family will receive visitors beginning at 9:30. In lieu of flowers, Memorial contributions may be made in Jack’s name to the Salvation Army at salvationarmyusa.org or St. John Neumann Catholic Church, 601 Delp Road, Lancaster, Pennsylvania 17601.