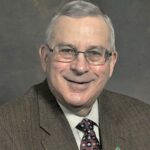 Following a life dedicated to the practice of medicine and caring for his family, our dear husband, father, grandfather, G-pa, and friend, Dr. John F. Kuglitsch, 77, passed away peacefully in Pewaukee on Sunday, November 1, 2020.

John was born on December 27, 1942, in Springfield, Massachusetts, the first child of Frank G. Kuglitsch and Elizabeth M. Kuglitsch (neé Frigon). He moved as a young child with his family to Greendale, Wisconsin, where he grew up in a Greendale “original” home and graduated from Greendale High School. He received his bachelor’s degree, cum laude, from Marquette University in 1965. It was at a Valentine’s Day party during college that John met his future wife, Maureen Hall, of Racine. After college, he attended the Marquette School of Medicine (now known as the Medical College of Wisconsin). He graduated medical school in 1969, after being awarded the Ben Wagner Memorial Award that same year. After graduating from medical school in 1969, he was an intern at St. Joseph’s Hospital in Milwaukee, Wisconsin, and then a resident of Internal Medicine at Mayo Clinic in Rochester, Minnesota. He was deeply touched, and forever guided, by the motto of Dr. William Mayo, that “the most important interest to be considered is the best interest of the patient.”

He practiced Internal Medicine for 40 years; 20 years in Fond du Lac, Wisconsin, and 20 years in Milwaukee, Wisconsin, as a member of the staff of St. Agnes and West Allis Memorial Hospitals, respectively. John was a dedicated physician who came to be loved by many patients. While at the Fond du Lac Clinic, he became the St. Agnes Hospital Director of Continuing Medical Education from 1975 to 1985 and the Chairman of the Department of Internal Medicine from 1985 to 1990. Over the years, while at Aurora Health Care, he served on several committees, including as Chairman of the Medical Care Review Committee at West Allis Memorial Hospital. He was Board Certified in Internal Medicine and was inducted, in 1982 as a Fellow of the American College of Physicians.

As his sons were growing up, John enjoyed traveling to see their sporting events. He was also an avid gardener and lifelong fan of the Green Bay Packers. He treasured the opportunity to visit with extended Kuglitsch relatives in Feistritz an der Gail, Austria, in 2004. In retirement, a beloved dog, Queenie, provided special companionship. Winters in Arizona from 2011 through early 2020 were a highlight of the year for John. Above all, he ensured that the needs of his patients and family were met, and he took great comfort in his Catholic faith.

John was predeceased by his parents and his brother, Ronald Kuglitsch.

A public celebration of his life will take place at St. Camillus in 2021, with details to be announced at a future date.