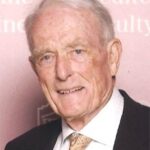 It is with heavy hearts that we announce the passing of Dr. John (Jack) Joseph Malloy, loving husband, father, grandfather and great grandfather. Surrounded by his family, John passed away peacefully at home on Tuesday, February 15, 2022. Born in Ottawa in 1931, John grew up in old Ottawa South, and alongside his brothers and sisters attended St. Patrick’s High School and later Glebe Collegiate. John was always proud to share that Glebe Collegiate was one of the top ranked schools in Canada at the time he attended. After high school, John would go on to attend the University of Ottawa, where he graduated with a medical degree. While attending university, John was a standout football player, and in 2012 he was inducted into the Gee-Gees Football Hall of Fame. In 1955, John, a medical student at the Ottawa General, met his future wife Ida, who was a nurse working in the hospital. John and Ida were married the following year. John went on to complete his specialty training in Obstetrics and Gynecology through the Mayo Clinic in Rochester, Minnesota. After working for a short time in Rochester and Spokane, Washington, John and Ida moved to Fort William in 1963 where they would raise four children and John would go on to practice medicine for 34 years. John loved his work, and by the time he had retired in 1997, he had delivered thousands of babies and touched many lives. You would be hard pressed to walk the streets of Thunder Bay with ‘Doc’ Malloy without a pleasant encounter with a grateful parent or former patient. During his career, John served as President of the Medical Staff and Chief of Staff at the Port Arthur General and McKellar hospitals, and provided training to many medical students. John was also involved in his community by serving as a Trustee for the local Catholic School Board, and a Captain in the Lake Superior Regiment.

Above all, John was a devoted family man. The cornerstone being his partnership of 54 years to his beloved wife Ida, whom John looked to for guidance, strength and adventure. John was an engaged, supportive and loving father to his four children, to each in a unique way. He spent endless hours at rinks, football fields and pools cheering on his children and grandchildren and offering subtle advice to help navigate life’s wins and losses. John also had an adventurous nature, and loved the outdoors, no matter the season. As a longtime member of the Port Arthur Hunt club, John was a passionate fisherman and duck hunter, and few things made him happier than sharing these times with his children and grandchildren. Hiking the Chilkoot Pass and Jasper National Park with Joe, Hanna, and Chris, annual canoe trips to Quetico Park with his children, and countless fishing trips with his grandchildren and friends were amongst John’s favorite things. Behind every adventure was Ida, planning and preparing for weeks, and as happy to have John and his entourage leave as she was to have them return.

After John retired, he and Ida traveled by RV through Australia, New Zealand, Ireland, Scotland, Russia, and Mexico. One exceptional adventure took them on a road trip to the Panama Canal. John and Ida especially enjoyed their travels to Mexico and continued to winter in San Jose Del Cabo for more than ten years. John and Ida were perfect travel partners and John was always proud to say that there was no one other than Ida that would be willing to travel with him to so many remote and sometimes difficult destinations. His golden rule was to follow Ida’s judgment, and he would say that it never led them astray. The last leg of many of these trips included stops in Woodstock and Ottawa to spend time with their children and grandchildren to share their experiences and to reconnect with family. John will always be remembered as a compassionate life long learner, a skilled conversationalist, and a gracious and generous host. We love you Pa.

John is survived by his children: Joseph (Jo-Anne) Malloy of Woodstock, ON, Hanna (Mark) Stewart, Chris (Michele) Malloy of North Saanich, BC, and Justin (Sandra) Malloy of Ottawa; grandchildren: Lauren, John and Neil Stewart, Ida and Emma Malloy, and Robert and Michael Malloy; and great grandchildren Adelyn and Edgar McCulloch. John is also survived by his brothers Tony (Suzanne) of London, ON, Ken (Sandra) of Carleton Place, ON, and sister Claire of New Orleans, LA. John was predeceased by his beloved wife Ida, his parents Joseph and Tillie, his brother Robert, and sister Joan.

John’s family would like to thank the many staff and support workers at the LHIN who provided compassionate and consistent care for John over the past months. At John’s request, there will be no funeral or service, and a family internment will take place at a later date.