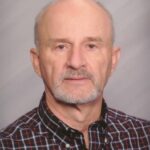 FARGO – John George Manesis, 85, passed away peacefully at home in Fargo, North Dakota on Wednesday, October 20, 2021. John and his fraternal twin, George, sons of Nick and Mary (Pikios) Manesis, were born on September 19, 1936, in Eau Claire, Wisconsin. Nick was the proprietor of the Dor Smith Cafe in Eau Claire for many years until the family moved to Denver, Colorado in 1950. John graduated from Denver East High School in 1954, Denver University in 1958 and Creighton Medical School in 1962. John met his wife, Bess, in 1959 while he was in medical school and she was at St. Joseph Hospital School of Nursing in Omaha. They were married on July 7th of 1960. They were blessed with two daughters and two sons who all became, in his words, “good citizens.” John took his internal medicine training in Omaha, Nebraska and Milwaukee, Wisconsin. He was stationed at Camp Pendleton in California from 1966-1968 where he was assigned to the Naval Hospital. He then practiced in internal medicine in Appleton, Wisconsin from 1968-1971. From 1971 to 1974, John made a career change and completed a residency in diagnostic radiology at the Mayo Clinic in Rochester, Minnesota. John then practiced at the Fargo Clinic (later MeritCare, now Sanford) from 1974 until he retired in 1996. John loved poetry and began writing his own poems in his 50s. His work appeared in well over 1oo literary publications, including many anthologies. He published nine books of poetry on a variety of topics near to his heart, including his Greek heritage, his experiences as a physician, baseball, and cats, reflecting John’s broad interests. In addition to poetry, John wrote and published a children’s book. He collected memorabilia for much of his adult life, including stamps, old signs, posters and baseball cards, and prized his ’47 and ’48 Seeburg jukeboxes which played 78RPMs. John, a consummate storyteller, had a wit and humor that kept people smiling and laughing. He was an active listener who took a keen interest in others from all walks of life. A generous and compassionate man, and a dedicated husband, father, brother, uncle, and friend, he touched many lives. After John’s diagnosis of cancer, he commented on a few occasions, “C’est La Vie,” reflecting his philosophy on life. He pursued his passions, lived with no regrets and was grateful for his rich, fulfilling time on this earth. John kept busy with his New York Times crossword puzzles, poetry, golfing and volunteering (as a tutor in English as Second Language). And he spent his retirement days with his family, friends and beloved family cat, Cleo, sitting on his lap. John is survived by his wife of 61 years, Bess Davis Manesis, Fargo; daughters Mary, Los Angeles, California and Stephanie, Fargo; sons George (Tanya), Richfield, Minnesota and Peter (Lisa), Iowa City, Iowa; twin brother George (Georgia), Kenosha, Wisconsin; sister JoAnn, Austin, Texas; sisters-in-law Stacey Manesis, Muskego, Wisconsin, Chris Manesis, Madison, Wisconsin, and Mary Bomar, Fremont, Nebraska; goddaughter, Simbo Legesse, Shakopee, Minnesota; and many beloved nieces and nephews. In addition to his parents, John was preceded in death by his brothers Dale, Pete and Danny and his sister-in-law Dina (Dale’s wife) and brother-in-law, Harry Bomar (Mary’s husband). John and Bess’ primary residence was in Fargo, although they spent winters in Sun City, Palm Desert, California, where they are members of St. George Greek Orthodox Church in Palm Desert. They are also members of Holy Resurrection Orthodox Church in Fargo. An Eastern Orthodox Funeral Service will take place at Holy Spirit Catholic Church in North Fargo on Tuesday, October the 26th at 11AM. Please wear masks to the funeral service. Burial to follow and then a luncheon at Plains Art Museum in Fargo at approximately 1:30 PM. The funeral will be livestreamed and recorded at www.boulgerfuneralhome.com. Online remembrances and condolences may be expressed by visiting John’s obituary at https://boulgerfuneralhome.com/obituaries/dr-john-manesis/ In lieu of flowers, memorials may be directed to your charity of choice.