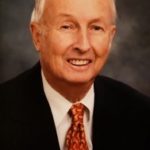 Dr. John Spalding June 20, 1931 – Feb 13, 2020 On Thursday, February 13, 2020, Dr. John Arthur Spalding, loving husband and father of seven children, died at the age of 88. John was born June 20, 1931 in Toledo, Ohio to John Dominic Spalding and Juliette Anna Spalding (nee Perrusset). He was raised in Los Angeles, attending Loyola High School and then Loyola University. He was accepted to Marquette University Medical School and completed his medical training at The Mayo Clinic. While at The Mayo Clinic, he met Marita Fischer. He and Rita were married October 15, 1960 and returned to Los Angeles in August, 1961. That year, John established his medical practice in Palos Verdes and would continue to work there until his retirement in 1997. He is survived by Marita, his wife of almost 60 years, along with two daughters: Lisa and Teresa; and five sons: Bob, Dave, John, Mike and Mark; he is also survived by his sister, Mary Lou Cashin; he is survived by fourteen grandchildren and one great-granddaughter. His funeral will be held at St. Lawrence Martyr Church, 1900 South Prospect Avenue, Redondo Beach at noon on Saturday, February 22, 2020. Visit www.lafuneral.com to send the family messages, share memories or obtain directions to the service.