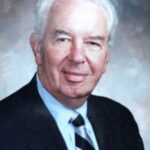 John (‘Jack’) was the only son of John and Pearle Spittell. He was born in Baltimore, Maryland on April 7th, 1925. After High School, he received a Bachelor of Science degree from Franklin and Marshall College. He subsequently received a Doctorate of Medicine from the University of Maryland Medical School in 1949.

In January 1947, he met the love of his life, Beverly, on a blind date, and together they enjoyed 68 years of marriage.

Dr. Spittell served his country in the Navy and in the Air Force during World War II and the Korean Conflict.

Dr. Spittell completed the Internal Medicine Residency program at Mayo Clinic College of Medicine and Science in 1955 and subsequently became a staff physician at the Mayo Clinic. He worked in the Department of Internal Medicine, specializing in the diagnosis and management of Peripheral Vascular Disease and Cardiovascular Disease until his retirement in 2000. During his time at Mayo Clinic, he mentored countless residents in internal medicine and fellows in cardiovascular disease. In his more than 50 years as a physician, he provided compassionate care for patients from around the world.

Dr. Spittell published more than 120 manuscripts in peer reviewed medical journals. He was the Chief Editor of 6 medical textbooks, including a 12-volume series entitled Clinical Medicine. He also authored more than 50 textbook chapters in the field of Peripheral Vascular Disease.

Notably, in 1974 he was appointed by Judge John J. Sirica to evaluate former President Richard M. Nixon to see if the former president was able to travel to Washington D.C. to testify in the Watergate trial of President Nixon’s former staffers. A testament to his recognition as a world expert in the field of Peripheral Vascular disease.

Passionate about his wife and children, he relished family gatherings at his lake home in Burnett County, Wisconsin. He also loved baseball and was an avid Baltimore Orioles fan.

He was preceded in death by his wife, Beverly, and his parents. He is survived by his children;

A Service is planned for Saturday, May 7th at 11:00 am at Calvary Episcopal Church, where he was a member.

In lieu of flowers, memorials can be made to Calvary Episcopal Church, 111 3rd Avenue SW, Rochester, MN 55902.