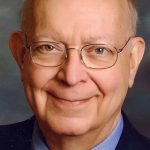 John was a physician and scientist who spent his career on staff at Mayo Clinic (1973-2001). He was Board Certified by the American Board of Pediatrics and the American Board of Allergy and Immunology. Known to his co-workers as JY, he is remembered as bringing grace, kindness and humility to his patients and colleagues, as well as a sense of humor, a boisterous laugh, and a twinkle in his eye. He served on numerous committees, both at Mayo and in national professional organizations.

John was a recognized authority on food, latex and insect allergies. He won numerous honors and awards for his work, both from Mayo and from national medical organizations. He authored 167 articles and 63 book chapters on various aspects of allergy and immunology. John served 27 years as director and then as president of the American Board of Allergy and Immunology, retiring in 2009.

John was a 1960 graduate of Franklin and Marshall College in Lancaster, Pa., and of Jefferson Medical College in Philadelphia in 1964. He served his internship at Geisinger Medical Center in Danville, Pa., from 1964-1965 and his residency in pediatrics at Children’s Hospital of Pennsylvania in Philadelphia from 1965-1966 and at Geisinger Medical Center in Danville from 1966-1967. He was a veteran of the Air Force, proudly serving as a pediatrician on the Chanute AFB in Illinois.

Along with John’s professional accomplishments, he was an avid baseball fan, becoming a proud member of Red Sox Nation at the age of 9. He loved to play the piano and accordion, enjoyed classical music, especially when played on the organ or harpsichord, telling or hearing a good story, Fantasy Football, Indian food, jigsaw and crossword puzzles and collecting antique English Ironstone china. He was a member of Congregational Church, UCC, where he had served on many committees.

A memorial service will be held at 11 a.m. Saturday at Congregational Church UCC in Rochester. A reception will follow. Wearing of Red Sox colors or those of your favorite baseball team will be welcome.

In lieu of flowers, memorial contributions may be made to Mayo Foundation, Pancreatic Cancer Research or to Congregational Church, UCC music program.