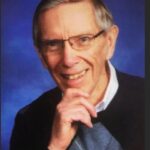 Jon Barber Closson, a man known for his integrity, devotion to others, and sense of service to all, died peacefully on December 3, 2022, surrounded by family and snuggled by one of his furry, four-footed “grandkids.” Jon lived a life of achievement balanced by humility as well as adventure balanced by caution. Always thoughtful and intentional, Jon loved getting to know people and extended himself to make others feel comfortable in his presence.

Jon was born the youngest of three on March 28, 1937, in Ashland, KS, the son of a school teacher and a country doctor. This bucolic beginning was disrupted when the United States entered World War II and his father joined the Navy, serving as a physician on Tinian Island. Jon and his family spent the war years in San Francisco where their involvement with the Presbyterian Church exposed them to medical-based opportunities for international work. Consequently, the Clossons moved to India in 1947, where Jon’s father practiced medicine at Miraj Medical Center while the children attended international boarding schools: a life-changing three years for all.

After returning to the United States, the family settled in Glen Burnie, MD, the city of Jon’s high school alma mater. Jon studied English at the University of Maryland where he also graduated from medical school in 1962. That same year, Jon married Bonnie Leigh Eshelman shortly before he was drafted into the Navy. Between 1963 – 1971, he and Bonnie were stationed on Guam and in Philadelphia and Annapolis, having a child at each location, before leaving the Navy to begin life as civilians. Jon practiced as an internist in Defiance, OH (1971 – 1981), and as a physiatrist at the Mayo Clinic in Rochester, MN, before retiring in 2002.

Following in the footsteps of his father, Jon’s career was marked by a dedication to medical needs around the world. Beginning in 1987 and lasting beyond his retirement, Jon consulted and served with medical communities in China, India, Haiti, Viet Nam, and Malawi. In particular, Jon and Bonnie spent a number of years assisting with the establishment of and professional trainings for a Physical Medicine and Rehabilitation unit in Nanjing, China. After Bonnie’s death in 1998, Jon married Diane (Fetrow) Hansen, who also joined and supported these adventures.

Despite being devoted to his career, Jon always made time to be an involved and loving father and grandfather. He also served in leadership roles in local Presbyterian churches and on nonprofit Boards. In all of his “spare time,” Jon was an avid outdoorsman and conservationist, and he loved listening to classical music, singing, playing golf and tennis, skiing, fishing, and traveling the world. A life well-lived indeed.