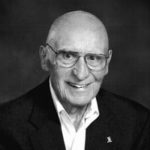 Joseph G. Merrill, M.D., retired surgeon, passed away on September 19, 2017.
He was born on September 22, 1918, in Vermilion, Illinois to Verna (Sanders) Merrill and William M. Merrill. He attended DePauw University in Green Castle, Indiana, on an academic scholarship, graduating in 1939. He then entered the University of Illinois Medical College in Chicago, receiving a Medical Degree in 1943. In 1949 he received a Master of Science degree in Surgery. After serving an internship at St. Luke’s Hospital in Chicago, he entered active military duty as a 1st lieutenant in the U.S. ArmyMedical Corps. He was assigned to the 99th Infantry Division and was involved in the Battle of the Bulge and crossing the Rhine at Remagen.
After the war, he completed a fellowship in general surgery at the Mayo Clinic in Rochester, Minnesota, and opened an office in Grand Junction in 1950. Dr. Merrill was the first board-certified general surgeon to practice in Grand Junction and performed the first chest surgery at St. Mary’s Hospital in 1951. He was a Diplomat of the American Board of Surgery and a Fellow of the American College of Surgeons. He also served on the board of the Colorado Medical Society. Dr. Merrill retired from practice in January 1988.
Dr. Merrill married his high school sweetheart, Winifred Weberg, on February 8, 1941. They had five children and 11 grandchildren. After Winifred’s death in 1994, he married Bunnie Reece. She survives.
Others survivors include children, Judy (JD) Snodgrass, John (Toula) Merrill, Doug (Paula) Merrill, Bill (Mary Kay) Merrill, and Laura Merrill (Joel Jackson); 11 grandchildren; 13 great-grandchildren, and extended family.
A memorial service will be held at 10:00 a.m. on Tuesday, September 26, at the First United Methodist Church of Grand Junction.
In lieu of flowers, memorial contributions may be made to HopeWest, 3090B North 12th Street, Grand Junction, or First United Methodist Church, 522 White Avenue, Grand Junction.