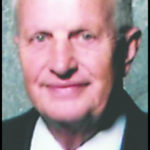 JUSTIN E. (BARNEY) ARATA, M.D., 96 of Fort Wayne, passed away Monday, Nov. 27, 2017. Born in Mishawaka, Ind. on Oct. 31, 1921, he was the son of Alphon sus P. and Mary Geneva (Schroeder) Arata. Dr. Arata graduated from St. Monica Elementary School and Mishawaka High School, where he lettered in football. He completed his undergraduate work at Indiana University, Bloomington, where he was awarded Phi Beta Kappa for scholarship. He then entered Indiana University School of Medicine, where he was class president and earned the Alpha Omega Alpha scholastic award. After completing medical school, he entered the U.S. Navy and served in World War II. He interned at the U.S. Naval Hospital in Oakland, Calif. and then joined the Pacific Fleet as a medical officer. He participated in the atomic bomb tests at Bikini Atoll in 1946. After his discharge as a Lieutenant, junior grade, he returned to Fort Wayne where he completed 15 months of postgraduate education at St. Joseph Hospital. He then moved to Gregory, S.D., where he worked as a locum tenens physician in general practice, for nine months. This was followed by his surgical fellowship at the Mayo Clinic in Rochester, Minn. He returned to Fort Wayne and joined the surgical practice of Dr. C.G. McEachern. He was called back to military duty during the Korean War and was assigned to the U.S. Air Force as a surgeon, on the island of Bermuda. In 1954, he returned to private surgical practice in Fort Wayne where he continued practicing until his retirement in 1991. Dr. Arata was Board Certified in General Surgery, a member of the Fort Wayne Medical Society and the American College of Surgeons. He and his partner, Dr. Alan Perry, founded the Arata Medical Group as well as the first Health Maintenance Organization in Indiana, Summit Health. Dr. Arata was a past President of the Indiana chapter of the American College of Surgeons. He was a staff member of all three Fort Wayne hospitals and served as President and Director of Medical Education at Parkview Hospital. He was a past board member at Bishop Dwenger High School and was inducted into the Bishop Dwenger Hall of Fame. He served as a team physician for Bishop Dwenger for 30 years. He and his late wife, Mary I. Arata, were founding members of the Doctors Mayo Society, a Laureate of the Mayo Alumni Association and a founding member of the American Society of Bariatric Surgery. Dr. Arata, along with Dr. Dave Schleuter and Carol Burns, RN, established the organ donation program in Fort Wayne. At one time, the program supplied over 50 percent of all donated kidneys for transplant in the state of Indiana. He was an Assistant Professor of Surgery at the Indiana University School of Medicine. Dr. Arata was a founding member of the St. Vincent de Paul Boy Scout Troop. He volunteered at Matthew 25 Clinic for many years. He and his late wife, Mary I. Arata, funded several bronze sculptures created by Professor Sufi Ahmad, in both Mishawaka and Fort Wayne, and donated to the communities. He was a lifetime member of the American Legion, Lincoln Post 82 and was a 4th degree member of the Knights of Columbus. Upon his retirement, Dr. Arata was awarded the Sagamore of the Wabash by the Governor of Indiana. He was also presented the Kentucky Colonel award by the Governor of Kentucky. He was Board Chairman of EMS Summit Circuits in Logansport, Ind. and was involved with several other businesses in Colorado and Wyoming. Dr. Arata was predeceased by his wife of 62 years, Mary Imelda Welsch Arata. He is survived by their seven children, Catherine Schlesinger of Charlotte, N.C., Nancy Teagarden of Wolcottville, Ind., Dr. Michael (Jane) Arata of Fort Wayne, Patrick Arata (DeeAnn) of Fort Wayne, James E. (Maureen) Arata of New Haven, Ind., Mimi (Dr. Michael) Conway of Tucson, Ariz. and John (Jane) Arata of Gahanna, Ohio, his wife, Patricia Semple Arata; three step-children, 15 grandchildren and six great-grandchildren; sisters, Adelaide Caleal and Agnes Laux and a brother, Dr. James A. Arata. Mass of Christian Burial is 10:30 a.m. Friday, Dec. 1, 2017 at St. Vincent de Paul Catholic Church, 1502 E. Wallen Road, with calling one hour prior. Calling also from 2 to 4 and 6 to 8 p.m. Thursday, Nov. 30, 2017 at D.O. McComb & Sons Pine Valley Park Funeral Home, 1320 East Dupont Road. Burial in Catholic Cemetery, Fort Wayne, Ind. In lieu of flowers, preferred memorials are requested to the Mayo Clinic Foundation or to Bishop Dwenger High School. To sign the online guestbook visit www.domccombandsons.com