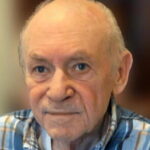 Kenneth J. Cichosz, 84, of McKinney, Texas, formerly of Scaly Mountain, North Carolina, and Lewiston, New York, entered into eternal life on April 30, 2020, after a battle with Alzheimer’s. He was born September 11, 1935 in Milwaukee, Wisconsin, the only child of Sophie (Redman) and John Cichosz.
Ken was a football and basketball athlete at Don Bosco High School in Milwaukee. He attended the College of the Holy Cross, Worcester, Massachusetts, and Marquette University, Milwaukee, Wisconsin; and was admitted to Marquette School of Medicine (now Medical College of Wisconsin) after three years of undergraduate study.
Upon graduating from medical school in 1960, he interned at St. Mary’s Hospital in Duluth, Minnesota. In 1961, he began a residency in anesthesia at Mayo Clinic, Rochester, Minnesota, which was interrupted when he served in the U.S. Air Force as a medical officer at Travis Air Force Base, Fairfield, California, from 1962 until his discharge in 1963. He continued his residency at Los Angeles Children’s Hospital and finished at Mayo Clinic in 1965. Following the completion of his residency, Ken joined an anesthesiology practice in Niagara Falls, New York, and served as Chief of Anesthesia at Niagara Falls Memorial Medical Center until he retired in 1993.
Ken was known for his quiet demeanor and dry sense of humor. He greatly enjoyed sailing Lake Ontario with his crew of family and friends on his boat, Teazer, which was named after a War of 1812 privateer, and was a nod to his sense of humor. Those closest to Ken will remember him as a self-sacrificing, humble man with little interest in material things. He also was devoted to his Catholic faith and was the patriarch of seven children.
In addition to being a connoisseur of grilled corn on the cob, Krakus Polish ham sandwiches and butter-tossed popcorn, Ken enjoyed his hospital bowling league, built and launched model rockets, breezed through the daily Wall Street Journal crossword puzzle, baked bread, brewed beer, and commiserated with Buffalo Bills fans, but his true loyalty was to the Green Bay Packers.
Ken is survived by his high school sweetheart and wife of 60 years to the day, Laura (Siegrist); and their children, Elizabeth (Timur) Tyra of Jamestown, New York, Mara (Rex) Conklin of Lexington, Kentucky, Vincent (Mona-Lisa) Cichosz of Parker, Texas, Monica (Barclay) Wellman of Arlington, Virginia, Noreen (Alan) Young of Louisville, Kentucky, Sharon Cichosz of Montreal, Quebec, and Andrew Cichosz of Falls Church, Virginia. He was the loving “Dziadzia” of 13 grandchildren, Alexandra, Eric and Harrison Tyra, Elisabeth, Emily and Margaret Conklin, Kayley, Nikolas, Teresa and Joseph Cichosz, Barclay (Trip) Wellman, Sophie Young and Ciaran Cichosz.
A funeral mass will be held at 11:00 AM, Tuesday, May 5, 2020 at St. Jude Catholic Church, 1515 N. Greenville Avenue, Allen, Texas. A rosary service is planned for 10:30 AM at St. Jude immediately preceding the funeral mass.
The family thanks Stephen White and the entire staff at Grand Brook Memory Care in McKinney for their loving and generous care of Ken and the entire family over the past three years.
To convey condolences or sign an online registry visit TJMfuneral.com.