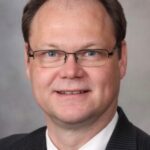 Kevin was born on January 30th, 1961 in St. Louis, Missouri. He attended St. Louis University High School (SLUH) and St. Louis University (SLU), receiving scholarships to both and graduating with a double major in Biology and Psychology. He went on to attend medical school at the University of Missouri – Columbia (Mizzou). While in Columbia, Kevin met his future wife Suzy, who was working at the hospital there as a nurse in the pediatric ICU. He graduated medical school in May of 1987, and he and Suzy married weeks later on June 6, 1987.

That same year, Kevin and Suzy moved to Rochester, MN where he started as an internal medicine resident at the Mayo Clinic. He went on to specialize in Rheumatology, completing his fellowship at Mayo from 1990 – 1993. During that time, his first child, Amanda, was born. Kevin joined the Mayo Clinic staff as a Rheumatologist following his fellowship. In 1996, Kevin and Suzy welcomed twin sons, Nick and Matt.

In his nearly 35 years as a doctor at the Mayo Clinic, he provided compassionate care for patients from around the world. He was an expert in lupus, conducting research and treating patients with this condition. He authored over 100 research articles and travelled both nationally and internationally to present his work at medical conferences. Suzy, Amanda, Nick, and Matt would often accompany Kevin on these trips. He also sincerely enjoyed passing his medical knowledge on to students, receiving multiple teaching awards.

Kevin valued spending time with his family. He loved well and was well loved. He was friendly, kind, and quick to share a joke that made others smile. Kevin loved baseball and was an avid St. Louis Cardinals and Minnesota Twins fan. He enjoyed reading, history, board games, movies, and time in the backyard with family.