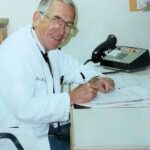 On June 17, 2019 at 6:21 a.m. just as the sun was rising, our hero, Dr. Lane Sawyer Dickinson, stepped up to the tee and hit one last, long ball down the fairway. The white ball could be traced against the perfect blue of the sky and as it landed and rolled steadily toward the final hole of the round, a cheer went up from the crowd. The world’s greatest athlete walked off the course to the applause of his fans. We are the fans. We were the luckiest. He was our cherished Pops, trusted Dad, adored Papa, skilled Doctor, favorite Uncle, loyal friend and brother. And finally and most importantly, he was the partner and love of her life to our Mom.

Our Dad was born October 30, 1924 in Appleton Wisconsin, the son of Kenneth Sawyer and Francis Pratt Dickinson and died on June 17, 2019 in Naples Florida. His life between those two dates contained joy, laughter and accomplishments. He steadfastly persevered and carried his share of sorrow as well. He spent his childhood in Appleton, with his brother and sister, Virginia and Kenneth and graduated from Shattuck High School where he played hockey and tennis. He was sidelined by a back surgery and spent a year on bedrest before attending Lawrence College where he met the woman of his dreams, Mary Vinson. They were married July 17, 1948 while he was a student of the University of Rochester School of Medicine. During an internship in Internal Medicine, he contracted tuberculosis and once again was sidelined with surgery and isolation in a TB sanatorium. He endured this two year absence from his wife and young children bravely, finally recovering to resume his education at Mayo Medical Center in Rochester, New York.

He entered into private practice at the Carle Clinic in Urbana, Illinois. Dad served the community of Urbana for over 35 years and took great pride in his calling as physician. He was well known for his professional expertise and kindness to patients and staff and often included his children in making house calls.

Our Dad led by example. He expected us to get an education and to contribute to the welfare of our communities. He believed in family, hard work and hard play. He left us with rich memories-enjoying the out doors, skiing, golfing, camping, family reunions.

After he retired, he and Mom spent much of their time in the Florida sunshine, where family and friends were always warmly welcomed. Mom was his greatest cheerleader and the past few years, he was hers. He protected, cared for and loved her until the day he left. He left this world so much better than it would have been without his goodness, integrity and love. With all our hearts, we are so grateful for how willingly he carried all of us, at one time or another, through life’s uncertainties and for being our true North Star. His memory lives on in his children,Tom, Cindy, Barbara, Peter and Chip, their spouses and 15 grandchildren. Until we meet again on that bright shore, Go Packers!