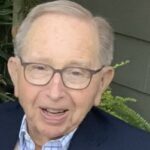 Roy’s personality and interests were innate. He achieved Eagle Scout and this accomplishment prefaced a life of leadership, teaching and a love of wildlife, hiking and fly fishing. While attending San Luis Obispo High School, he was accepted to The American Legion California Boys State. In his senior year of 1947 he was editor of the yearbook, president of the senior class and valedictorian. He was a modest, kind and private individual who knew as a young boy he would become a doctor.

Roy began his medical career in the United States Army as a pathologist. He worked from 1955 to 1964 at Walter Reed Medical Hospital, Letterman Army Hospital and the 121st Evacuation Hospital, South Korea. In 1964 he joined the United States Air Force, completing his neurosurgical residency at the Mayo Clinic in 1968. He received the Neurosurgery Travel Award, the only award presented by the Mayo Clinic in the neurosurgery department and was offered a staff position for one year, a rare occurrence.

From 1968-1970 he served as head of surgery, Tachikawa Air Force Hospital in Japan and from 1970-1975 he was Chief of Neurosurgery and Program Director of Neurological Training at Wilford Hall in San Antonio Texas, retiring as a Colonel from the United States Air Force, Medical Corps in 1975. He was in neurosurgical private practice in Yakima, Washington until 1989 and a member of the neurosurgical staff at Virginia Mason Hospital from 1989 to 1991.

He was an avid fly fisherman, wine enthusiast, traveler, member of the University of Washington’s President Piano Series and the Kenmore Shooting Range. His intelligent wit was savored by family and friends; they knew he held admiration for all who showed effort and proved their talent to its fullest. As he did.

A memorial service to be held in San Luis Obispo, California in the fall of 2021.

Memorials or donations may be made to the Seattle Humane Society or The Nature Conservancy.