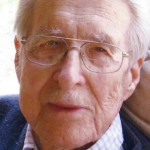 Dr. Lewis Benjamin Woolner died on June 13, 2016, in his Rochester home. He was 102 years old. He went peacefully, surrounded by the love and care of his family. Dr. Woolner was an extraordinary man who touched many lives.

He grew up in North Rustico, Prince Edward Island, Canada, acquainted with the hard work of a farming life, plowing the fields of his father’s farm with a team of draft horses in the days before the arrival of the tractor. He attended Prince of Wales College in Prince Edward Island, Canada, and then went on to earn a degree from Dalhousie Medical School Halifax, Nova Scotia, where he met his future wife, Laura Stanley.

Dr. Woolner came to Mayo Clinic in 1945, joining the staff in 1948, where he worked as a surgical pathologist for 33 years until his retirement in 1981. Over the years, he made significant contributions to the field of pathology, and was recognized worldwide by specialists for advances in his field.

Endowed with an exceptional memory, he was able to recognize hundreds of species of cancer cells and identify new ones. This outstanding memory also enabled him to recite long passages of Shakespeare, Coleridge, Wordsworth, Milne, etc. Dr. Woolner had an infectious charm that touched countless people whom he would regale for hours with anecdotes, jokes, memories, poetry and advice. He loved to travel the world and made many enduring international friendships.

Although Rochester was his second home, Dr. Woolner never broke ties with his boyhood home of Prince Edward Island, and he spent most of his summers there during retirement. In addition to his medical gifts, he was a proud and meticulous gardener and entertained many visitors over the years with healthy meals he cooked himself from his own organic produce and fresh-caught Prince Edward Island fish.

Dr. Lewis B Woolner was preceded in death by his wife, Laura Stanley Woolner, and grand-daughter, Katherine, and is survived by his five children and their spouses:  Elizabeth Anne, Nancy, Lewis Allan (Krisanne), David (Meliza), and Stanley (Sophea). He has six living grandchildren:  Maia, Leah, Clara, Ted, Nadia and Abraham.

We are so thankful for the years he shared with us, and we will never forget his warm humor, his wit and his generous, kind spirit. Dad, you were one in a trillion!

The Woolner family would like to thank the staffs of Home Instead and Mayo Clinic Hospice for their tender devotion and exceptional care they gave to comfort us all at this difficult time.

There will be a memorial service at 2 p.m. Monday at the First Presbyterian Church in downtown Rochester, followed by a reception at the same location.