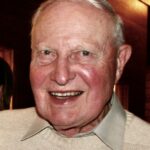 Lloyd Thomas Wood, age 95, of Rochester died peacefully in the presence of family at Mayo Hospital Methodist campus on October 29, 2020. He was born on August 8, 1925 in Lake City, Minnesota to Dwight and Mina Wood. He was raised on the family farm and graduated from Lake City High School. He attended Winona State College and received his BS from the University of Minnesota in 1951. He went on to earn his MD degree from the University of Minnesota Medical School in 1954. During his time in medical school he met his soulmate Beverly Ann Brandt. They were united in marriage on August 2, 1952, and together they raised their six children.

After graduation, Lloyd had an internship at Harper Hospital in Detroit, Michigan. He then entered private practice in 1955 in Forest Lake, Minnesota. Lloyd and Beverly moved their family to Rochester, Minnesota where he joined Olmsted Medical Group from 1958 to 1964. In 1964, he went back to complete a residency in Physical Medicine and Rehabilitation at the Mayo Clinic. Upon completion, he joined the staff at Mayo in 1966 and worked there until his retirement in 1987. He served as medical director, Department of Physical Medicine and Rehabilitation, at Rochester Methodist hospital from 1983-1987. He served as secretary, and later as president of the Minnesota Physiatric Society. He was instrumental in the development of Rochester, and later Southeast Minnesota, Center for Independent Living and the building of their independent living facilities in Rochester, Red Wing and Winona, serving as secretary of the board for many years. After his retirement from Mayo, he continued to do consulting work across the country for many years.

Lloyd is survived by his wife of 68 years, Beverly. He is also survived by his sister Louise Hartley of Mebane, NC, daughters Karen (Richard) Rubino of Clifton, VA, Beth Wood-Anderson of Rochester, Diane (Russell) Morris of Lindstrom, MN and by sons Cameron (Kirstin), Craig and Thomas (Jean) all of Rochester, his grandchildren Jennifer, Sarah, Krista, Anna, Zachary and Lauren as well as his 10 great-grandchildren and many nieces and nephews. He was preceded in death by his parents and his brother Ennis.

A private family celebration of life is planned as Lloyd donated his body to the Mayo Clinic. Memorials are preferred to the University of Minnesota Medical School, SEMCIL or the Mayo Foundation. The family wishes to thank the Mayo Palliative Care program for their compassionate care.

Ranfranz and Vine Funeral Home is honored to be serving the Wood family; to share a special memory or condolence please visit www.ranfranzandvinefh.com.