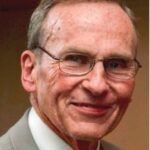 He was born August 18, 1937, in Peoria to Bernice Dickerson Whittaker and Dr. Lorin D Whittaker Sr. He married Rebecca Martin on December 31, 1979. She survives him.

He was preceded in death by his parents and a sister, Barbara Jean Whittaker.

He served as Captain in the US Army from January 1969 to December of 1970. He was stationed at the 121 EVAC Hospital in Korea. He then served with the American Medical Association as a volunteer physician/surgeon in Vietnam.

Following his military discharge, Dr. Whittaker returned to Peoria to join his father’s surgical practice. He retired from private practice in 2000 and joined the faculty of the University of Illinois College of Medicine in Peoria as Clerkship Director for the surgical rotation. He was named Faculty of the Year for all the Illinois Medical School campuses in 1992. He was also a Professor of Medicine for the U of I College of Medicine and Professor Emeritus of Clinical Surgery.

Dr. Whittaker was a member of the Peoria County Medical Society serving as President in 1984. He also held membership in the Illinois State Medical Society and the American Medical Association. He belonged to the Illinois Chapter American College of Surgeons, serving as their President. He was board certified by the American College of Surgeons and acted as an Illinois delegate on many occasions. He also served as President of the American Cancer Society in Peoria and for CIMRO. During his years of practice, he was a member of the staff of Methodist, St. Francis, and Proctor Hospitals. He served as staff president for Methodist in 1987.

Dr. Whittaker was a devoted husband, father and grandfather. During his retirement, he spent time in Colorado, Florida and Illinois. He and Rebecca traveled all over the world and took a number of cruises. They traveled to medical meetings all over the country, most often with a group of dear friends for 30 years. They skied, hiked, biked and even went ice climbing. Their favorite activity was taking the golf cart to the square and dancing to live music in The Villages, FL. He greatly enjoyed watching grandchildren in all their endeavors. He loved his pets, especially a little cat named Dixie. He will be remembered for his caring attitude toward his patients, family and friends.

A Celebration of Life will be held June 3, 2022 from 5 to 7 pm at the Hespell Lodge at Wildlife Prairie Park. Davison-Fulton Woolsey-Wilton Funeral Home is in charge of arrangements.

Donations may be sent to the Peoria Medical Society Alliance Foundation, P.O. Box 3134 Peoria 61612-9081, or any local animal shelter of your choice.