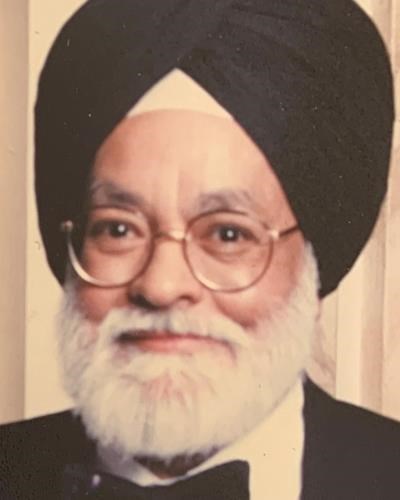 Dr. Manmohan Singh passed away peacefully the morning of February 13, 2021 at his home in Olympia Fields. His loving wife, Manjit; and sons, Gurmeet and Kirpal were there with him, along with his amazing caregivers, hospice staff, and visits by close friends.

Dr. Singh’s story is a remarkable, American immigrant story. He was raised by his grandfather in Patiala, India with his three beloved uncles who were like brothers to him. While surrounded by their love, he still had a tough childhood. He spoke to his oldest son about how he stayed up all night observing the stars when he received his first pair of eyeglasses. He survived a gruesome childhood accident that resulted in burns across his legs and an infection that nearly killed him at a very early age to go to medical school. His intellectual brilliance there (not his formidable acting and singing skills) led to an opportunity to come to America.

He was the originator of a method called the “Singh Index” for predicting the risk of hip fractures due to osteoporosis. Dr. Singh was welcomed with open arms by Drs. Mel Post and Leo Weinstein into the orthopedics department at Michael Reese Hospital after receiving a Fulbright Scholarship in 1969. Dr. Weinstein, his beloved mentor, quickly gave him the nickname “Mo,” inspired by the USS Missouri, aka “the Big Ship ‘Mo.” After training at Mayo Clinic in Rochester, Minnesota, Dr. Singh became the Director of Orthopedic Research at Michael Reese. He continued to study the problems of diagnosis and treatment of osteoporosis in his clinical practice up until the healthcare industry ruined the hospital.

He embraced all things Chicago. While he loved cricket and field hockey, he quickly became a White Sox fan. He took his sons to their first ball games at Old Comiskey. He loved the Bears. In the 80’s, when they were good, he celebrated their Super Bowl win, and wore a black armband to Super Bowl parties that didn’t feature the Monsters of the Midway. He cried when Mike Ditka was fired and Walter Payton passed away. Unfortunately, for his sons, he passed along that love for Chicago sports teams. It was a shame that he never saw the Bears win a title again. Thank god for the White Sox and Bulls, we think.

He passed along more than just that to his sons. He gave them an appreciation for the finer things in life. He regularly took his family to dine in Chicago’s best restaurants and the debuts of films that received “Two Thumbs Up” by Siskel & Ebert. He loved to go to the Art Institute and the Museum of Contemporary Art. His Punjabi humor found a ready audience with his friends, family, and strangers. He also took time to perfect the “Dad Joke” which unfortunately for his grandchildren (Sophia, Niko, Navah and Ronen) has been implemented by his sons, as well as singing songs one loves at the top of your lungs.

His kindness to his patients was legendary. He loved the residents he trained as well. For quite some time, he would entertain the graduating class every year at his home in Olympia Fields. His friends remember his joviality, generous hospitality, and penchant for making losing bets.

Parkinson’s disease made his body a prison for his beautiful mind and mischievous humor. While healthy though, he was a great father knowing when to offer help, guidance and tough love to his sons. They will forever be grateful for the opportunities he afforded them that many in this country do not receive. He was a testament to the greatness of this country’s embrace of immigrants and the opportunity it affords the brilliant and hardworking. He will be missed and we hope remembered by all those lives he touched.

The night before he passed, his family gathered to watch his favorite film with him, The Adventures of Robin Hood. The spirit of the film, we think, is what made him such a generous philanthropist. To that end, the family asks that in lieu of cards or flowers that gifts be made to one of his favorite charities. Checks/money orders should be mailed to: Save the Children, PO Box 97132, Washington DC, 20090-7132. Make checks payable to: Save the Children. You can make a check out to the U.S. Fund for UNICEF (or UNICEF USA) and mail it to UNICEF USA, 125 Maiden Lane, New York, NY 10038.