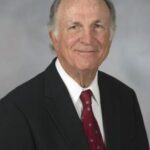 Flowood – Dr. Martin “Mart” McMullan, one of Mississippi’s most prominent cardiovascular surgeons, died on February 23, 2020 at Mississippi Baptist Medical Center from complications arising from dementia. He was 79 years old.

A memorial service is scheduled for him Thursday, February 27, at 2:00 pm at Northminster Baptist Church, with visitation preceding the service at noon. Inurnment in the church’s columbarium will follow immediately thereafter. Wright & Ferguson is assisting with arrangements.

Bearcat, Choctaw, physician, brother, husband, father, grandfather, and friend, Mart lived his life to the fullest. Mart was born on November 26, 1940 to Patrick Hillard McMullan and Mary Elizabeth McMullan. He was joined nine years later by his beloved brother William Russell “Rusty.” Mart made lots of memories growing up in Forest, MS in the 1940s and 1950s, including playing center in football for the Forest High Bearcats, hanging out with his friends at Kat’s Kave, and singing in his quartet with Jimmy Underwood, Rhett Mitchell, and Bob Shuttleworth. (Mart often joked that he got kicked out of the quartet when his friends went off to Millsaps and upgraded their melodist.)

Upon graduating from Forest High School in 1958, Mart enrolled at Mississippi College in Clinton, MS where he enlarged his circle of friendships. Among other relationships that Mart cherished, he met Ray “Razor” McPhail who would remain his partner in crime for the rest of his life. Mart also relished his days playing center on the Choctaw football team where the influence of team trainer Van “Doc” Quick helped lead Mart toward his career in medicine.

After graduating from MC in 1962 he enrolled as a medical student at the University of Mississippi Medical Center in Jackson. He also married his high school sweetheart Lyllian Lee on August 11, 1963. Their 56 years of marriage produced three wonderful children – M’lee, born in 1966, Misti, born in 1969, and Mart, born in 1972 – and nine grandchildren, who, as the proverb says, have been “the crown of the aged.” Mart was proud of his children and absolutely loved being a grandfather. If any of his grandchildren had an event, Mart was going to attend and was going to be enthusiastic and vocal in his support. (A trait he passed down to his son….) The times he spent with his grandchildren at hunting camp, on the ski slopes, and at sporting events were sources of tremendous joy for him and them.

At UMMC Mart’s circle of friendships widened even further. During his first year as a medical student he met Joseph Edwin “Joe Ed” Varner, Jr. and James Edward “Jimmy” Keaton, among others, with whom he would share the ups and downs of life for the next 50+ years. Thus began the enduring passion of Mart’s professional career, the practice of medicine, pursuit of lifelong learning, and saving of lives.

Mart remained at UMMC after graduation in 1966 and completed a surgery internship and residency under the legendary Dr. James D. Hardy from 1966-1971. Dr. Hardy’s influence on Mart cannot be overstated, and Mart considered himself fortunate to be one of the “Hardy boys.”

Mart continued his postgraduate education at the Mayo Clinic in Rochester, MN, completing a thoracic and cardiovascular surgery residency in 1973. He and Lyllian then moved their young family back to Jackson where Mart joined Cardiovascular Surgical Clinic. He would practice with CSC for 32 amazing years.

On his retirement from the O.R. at age 65, Mart wanted to give back to the place that had shaped his life and took a position as professor emeritus of surgery at UMMC. For the next ten years, Mart served there in various capacities, including Senior Advisor to the Dean of the School of Medicine and Vice Chancellor for Health Affairs. Mart was thrilled with the opportunity to mentor young doctors and recruit accomplished physicians to come to Mississippi. He widened his circle of friends yet again, establishing a beautiful friendship with, among others, Celeste Eason, who “kept Dr. McMullan in line” and continued to serve him after he retired from the Medical Center.

His professional accomplishments are too numerous to list. Among others, he was a fellow of the American College of Surgeons and the American College of Cardiology; authored multiple papers, served as Chief of the Baptist Hospital Medical Staff, and was the first physician to serve as Chairman of the Board of Trustees for Mississippi Baptist Health Systems.

But his zest for life and the friendships he developed along the way are what Mart will be remembered for most. He especially cherished his times with his Float Road hunting buddies and all his cousins, aunts, and uncles at McMullan Family Farms.

In lieu of flowers, please make any memorial gifts to Mississippi College, Batson’s Children’s Hospital or The MIND Center at UMMC, Northminster Baptist Church, or the charity of your choice.