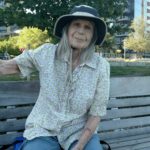 Dr. Mary J. Templeton died of natural causes at her waterfront residence in Portland, Oregon, on January 27 where she had been living since 2011.

Mary was born in Winona, Minnesota, in 1928.  Her father worked for General Motors and the family moved frequently.  While living on the East Coast, she enjoyed Bryn Mawr, antiques shopping in Lancaster PA with her mother and summers at the beach in New Jersey.  Her family ultimately ended up in Detroit where Mary went to college at the University of Detroit and medical school at the University of Michigan at Ann Arbor.  She came to the Mayo Clinic for residency training and it is there that she met her future husband, Texan Tom Schattenberg.

Mary, an internist, soon realized the role of mental health in overall wellbeing and decided to return to medical school to specialize in psychiatry.  At that time, her three children were all under the age of 11. She was very involved in medical school training and offered lodging and mentorship to many medical school students.

She then worked in private practice for many years before taking a position as medical director for the Minnesota State Health Department in 1985, monitoring nursing homes throughout the state.

Tom Schattenberg preceded her in death in 2012.

For those wishing to make donations in her name, please consider the organizations listed above.