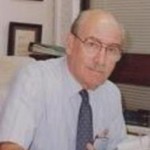 Maurice S. Albin, MD, MSc, pioneering anesthesiologist, died on July 2, 2016, at age 93 in his home in Birmingham, Alabama.
Dr. Albin was born and raised in Brooklyn, New York. After graduating from Abraham Lincoln High School, he entered the US Army and served in the European theater during WWII. He also served in the Army of Occupation in Germany. He graduated from New York University in 1952 and subsequently graduated from the medical school of the Universidad Nacional Autonoma de Mexico. He completed his training at the Mayo Clinic, specializing in Neuroanesthesia.
A career academic, Dr. Albin made several significant research contributions. He developed pivotal techniques to study and treat spinal cord trauma, including the use of hypothermia. With the prominent neurosurgeon Robert White, he isolated the mammalian brain, created methods of storage, and eventually transplanted brains into other animals. This research included the clinical techniques of vascular isolation, which is a cornerstone of modern cerebral vascular therapy. This work was nominated for the Nobel Prize in Medicine and Physiology in 2004 and 2010, and was featured in Peter Niesewand’s 1982 espionage novel, Fall Back. His later research led to a greater understanding of spinal cord blood flow, the biomechanics of spinal cord injury, and improved anesthetic management of patients with these injuries. His work on cerebral blood flow and ischemia under surgical conditions, and venous air embolism led to several important innovations.
He held academic appointments at Western Reserve University, the University of Michigan, the University of Pittsburgh, the University of Texas at San Antonio, and at the University of Alabama at Birmingham. He trained numerous fellows in Neuroanesthesia, and was a leader in the professional development of Neuroanesthesia and in international education. A founding member of The Society for Neuroscience in Anesthesiology and Critical Care (SNACC), he was the very first recipient of the SNACC Distinguished Service Award in 2001. SNACC also honored him with the annual Maurice Albin lecture.
Dr. Albin was one of the leading experts on Civil War anesthesia, publishing extensively on this topic. He studied and wrote about the history of air embolism, tracing study of this problem back to pioneering physicians of the early nineteenth century. His collection of nineteenth century medical books was donated to the Wood Library-Museum of Anesthesiology for future generations to enjoy the fruits of his collection.
Dr. Albin is survived by his wife of over 70 years, Marguerite Eileen Lilly Albin, his children, Roger Lee Albin (Anne B. Young Collegiate Professor of Neurology at the University of Michigan), Laurel Anne Albin (Director of Bar Success at University of Massachusetts School of Law-Dartmouth), and Ramona Carroll Albin (Assistant United States Attorney for the Northern District of Alabama), six grandchildren, and a namesake great-grandson.
Memorial contributions may be made to the following organizations: The DuPuy Scholarship Fund, PO Box 607, Ambler, PA 19002; The Anesthesiology Fund for Excellence in Education, Attention: UAB Gift Records, Administration Building 1230, 1720 2nd Avenue South,Birmingham, Alabama 35294-0112.
Published on NYTimes.com from July 4 to July 5, 2016