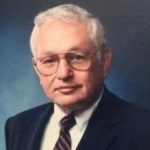 Dr. Cooper was a member of Phi Beta Kappa and Sigma Xi honor societies, and while at the Mayo Clinic received an award for his clinical research, as well as an M.S. in Medicine.

He opened his medical practice (now known as Medical Specialists of Fairfield) in Bridgeport, Connecticut in 1956, and practiced in the Bridgeport/Fairfield area for over 60 years.

He served as a Naval Medical Officer during the Korean War and was awarded the Bronze Star for Meritorious Achievement.

He is survived by his wife of almost 67 years, Lilla Blumenthal Cooper, his sons Bruce (Kristi) of East Lyme, Connecticut and Scott (Elizabeth) of Lexington, Massachusetts, his sister Gladys Rosenfeld of Berwyn, Pennsylvania, and his grandsons Jonathan (Katherine) and Benjamin, and his granddaughter Madeline, and his great-grandson Shaw, and was predeceased by his grandson, Matthew.

The family would like to thank Eric Ramos, Dr. Cooper’s long-time Physician’s Assistant, for helping him continue to do what he loved best – caring for his patients – until the last month of his life.

Funeral services will be private. A Memorial Service will be held at a future date.