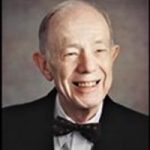 Dr. Neal Kirkpatrick passed away at home in Longview, WA on February 12, 2017 at age 97. Born in Richland Center, Wisconsin, he was the second of five sons of Bruce and Caroline Kirkpatrick. After graduation from Baraboo High School, summer home of the Ringling Brothers Circus, the family moved to Madison so the brothers could attend college within walking distance of home. At the University of Wisconsin he envisioned a career in music, but transferred to biology thinking that music would be better as a hobby. At Wisconsin he met and married Ethel Hull, his beloved wife for 55 years until her death in 2000. After medical school also at Wisconsin, he completed an internal medicine residency at the Mayo Clinic where his two sons, Dr. Richard Kirkpatrick of Longview and Dr. John Kirkpatrick of Seattle, were born. He initially practiced in Lincoln, Nebraska before moving his young family to Longview to join a Mayo Clinic colleague. Daughters Carol and Jane soon arrived. Other than two years with the U.S. Air Force in Anchorage, he practiced internal medicine in Longview for 58 years until his retirement in 2007 at the age of 88.

“Dr. Neal” was a pillar of the community and Longview’s chief conductor of everything musical. He led the Longview Community Church choir for over 50 years, inspiring the congregation with wonderful weekly anthems, stirring patriotic concerts and a thrilling annual rendition of Handel’s Messiah. He was also a standout flutist in local bands and orchestras. Through the church, Neal and Ethel, who was a consistent advocate for the needy, also supported many charities.

He was a voracious reader of medical literature and a lifelong learning advocate, and he passed his love of medicine to his two sons, who followed his footsteps to the Mayo Clinic. Son Richard returned to Longview, later joining his father in their Kirkpatrick Family Care Clinics during the last 10 years of his dad’s working life. Dr. Neal served as Chief of Medicine, Chief of Cardiology and Director of Medical Education at St. John’s Hospital, and wrote over 1,500 medical newsletters summarizing the latest medical developments, which he shared with numerous medical colleagues and other family members in medicine.

A memorial service will be held at the Longview Community Church on March 5 at 2:30 p.m.

Read the reflections by his son, Dr. Richard Kirkpatrick, online.

Published in The Seattle Times on Feb. 26, 2017. Obituary courtesy of Legacy.com.