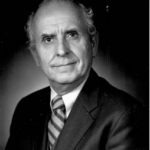 Dr. Norman Glenn Gordon Hepper died at Charter House, Rochester, MN, on October 27, 2022, at age 99. He was born on a farm in Underwood, ND on September 3, 1923, and attended a one room elementary school house, riding his horse, Fanny, to school each day. At 6’2″, he was “high point man” for the Underwood Comets basketball team and his love of the game lasted his entire life. Norm graduated high school in 1941 and went on to the University of North Dakota where he received his B.S. in 1944, with highest honors, and was inducted into Phi Beta Kappa. He received his MD from the University of Illinois College of Medicine in 1946, with honors. He was in military service and assigned to the U.S. Public Health Service from 1947-1949.
He held residencies in Des Moines at Iowa Methodist Hospital and Veterans Administration Hospital from 1949-1951. It was in Des Moines that Norm met a lovely nursing student, Charmaine Christina Peterson, of Dows, IA. They were married on March 4, 1951 and were rarely apart for 71 years. Norm and Char came to Rochester where he entered the Mayo Foundation as a fellow in internal medicine. In 1954, Norm earned his MS in medicine from the University of Minnesota. In 1955, he joined the staff of Mayo Clinic in the Medical Chest Department, later the Pulmonary Section. During his career, he started the Mayo Emphysema Clinic to improve the lives of patients who suffered with this diagnosis. With support from the Minnesota Lung Association and later Rochester Methodist Hospital, he started the first clinic in the Rochester area to help people stop smoking. With Drs. W.S. Fowler and Leo Black, he clarified the relationship between lung volume size and height and arm span measurement for the prediction of normal standing lung volumes in pulmonary function testing which is still used by Mayo Clinic today.
Norm was President of the Minnesota Lung Association, the Minnesota Thoracic Society, and the Southern Minnesota Medical Society which he then administered for many years. In 1954, he became a member of Sigma Xi Honor Society (Mayo Foundation Chapter). He was also a Professor of Medicine at Mayo Medical School. In retirement, he became active as a volunteer in Rochester Elementary Schools. With his Rotary Club, he developed “Rotary Readers,” and he and Char were very active in the afterschool academy as reading and math tutors. They established a family trust to fund additional tutors, and he actively participated into his 90’s.
As a former colleague wrote at the time of Norm’s retirement, “I have been most impressed with your humble and down-to-earth personality. It seems like you were born with this rarest of rare qualities. You may be a man of few words but each word you utter is like an invaluable pearl.” While Norm was quiet and introspective, he had a clever, dry wit that he injected into conversations smoothly and stealthily. He loved movies from the time he was a young man and spent many late retirement evenings watching TCM. He valued integrity and commitment and often rooted for the underdog, which was fortunate since he was a devoted Golden Gopher fan.
Norm was preceded in death by his parents, Lydia and John Hepper, and two brothers, Erven and Elmer. He is survived by Charmaine, daughters Elizabeth ( Robert Shepler) and Margaret (Keith Enright), son David (Ann), and grandson Charles. He was an avid reader, maintained a strong connection to his North Dakota farm roots, followed Minnesota Golden Gopher and professional sports, camped and fished in the Boundary Waters, played tennis and golf, house-boated on the Mississippi River, and traveled the world with his wonderful wife. We will miss him greatly and are blessed to have had him in our lives.