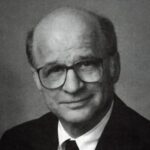 On April 16, 2020, O. Wayne Houser, M.D., died, at the age of 90, at Saint Marys Hospital in Rochester. He was born on Dec. 29, 1929, in Crosbyton, Texas, where he grew up on a farm with his father, James; his mother, Margaret (Martin); and his sister, Jean. Dr. Houser graduated from the Crosbyton High School in 1947 and attended Texas Technological College in Lubbock for one year before transferring to Baylor University, where he received his bachelor of science and medical degrees in 1954, and then completed his internship at the Henry Ford Hospital in Detroit, Mich. Afterward, he served in the U.S. Air Force for two years and worked as a general practitioner in his hometown for seven years. He married Elizabeth Sierleja in 1959 in Schenectady, N.Y.

In 1965, Dr. Houser and his family moved from Crosbyton to Rochester, where he began his career as a diagnostic radiologist, and he devoted the rest of his professional life to the field. After finishing his residency in 1968 at the Mayo Clinic Graduate School, he became a staff doctor of Mayo Clinic and pursued a sub-specialty in neuroradiology. He achieved the rank of professor of radiology in 1982 and received the Teacher of the Year Award in 1984 and the Distinguished Clinician of the Year Award in 1991.

Dr. Houser was a member of many professional medical and radiological associations and held significant leadership positions in a number of them. He was named a fellow of the American College of Radiology in 1979. Dr. Houser was also an active member of the American Society of Neuroradiology (ASNR). He served on the Rules Committee and Neuroradiology Training and Standards Committee, followed by holding a seat on the Executive Committee and then serving as president of the organization in 1983. The ASNR awarded Dr. Houser a gold medal for his service in 2001. In addition, Dr. Houser was closely involved with the Radiological Society of North America (RSNA). He chaired the Refresher Course Committee and the Strategic Planning Committee, and represented the RSNA at the American Medical Association-Diagnostic and Therapeutic Technology Assessment Program. He also served on the RSNA’s board of directors as the liaison for publications and became chairman of the board of directors and then president of the society in 1994. He was later awarded a gold medal from the RSNA. Lastly, Dr. Houser was named an honorary member of French Society of Radiology in 1996.

Dr. Houser is well known for his numerous contributions to medical journals, having published over 86 articles and 14 abstracts. He also served on the editorial board of the Journal of Computed Tomography and reviewed articles for Radiology, the American Journal of Neuroradiology and Clinical Anatomy.

On the personal side, Dr. Houser was a caring and loving husband and father. He was known for his kind, quiet, and humble nature. He was a member of Christ United Methodist Church. His past interests included golf, bridge and international travel, and he enjoyed reading about nature, history and economics.

Dr. Houser was preceded in death by his parents; his sister, Jean McEachern; and his nephew, Larry McEachern. He is survived by his wife, Elizabeth; his three children, Ann of Plymouth, James of Arlington, Va., and Craig of New York, N.Y.; and his two grandchildren, Allison Foy and Sydney Foy; as well as his two nieces, Karen (McEachern) Palmer and Susan (McEachern) Smith.

Due to the current pandemic, no services have been announced at this time. Donations preferred to the Mayo Foundation or the Research and Education Fund of the RSNA, 820 Joie Blvd., Suite 200, Oak Brook, IL 60523-2251.