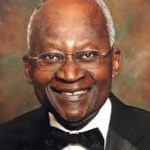 Dr. Onyekwere E. Akwari (Onye), Nigerian-American and first African-American surgeon on the faculty of Duke University, died at his home in Durham, North Carolina on April 14, 2019.  He was 76. He brought vision and confident persistence paired with an engaging, low-key temperament to his research and clinical work, to his citizenship in his university, and to his participation in the American and international surgical communities.

At Hope Waddell Training Institution in Calabar, Nigeria, he served as senior prefect. He was a varsity track and field and soccer athlete and was active in student government, international relations and civic affairs at the University of Washington from 1962-1966. For his civic work in Seattle, he was awarded Honorary Citizen of the City. He served as president of the student body at the University of Southern California School of Medicine, graduating in 1970.

Dr. Akwari joined the general surgery training program at the Mayo Clinic in 1970 and continued with research interests he had begun in college. His career research was in the neural and hormonal regulation of gastrointestinal motility. He authored clinical research on several rare surgical conditions and published designs for management of some common and uncommon surgical conditions. In a six-month hiatus from Mayo, he designed an Emergency Medicine Residency Program for Martin Luther King/Drew Medical Center for the Southeast Health Region of Los Angeles County.

In a sense, his life was about imagining what could be – for his patients, for medical science, for his university, and for the field of surgery.  He told his daughter, “My dream was to do something useful and being useful means doing something for other people.”

Dr. David C. Sabiston, Jr., recruited him to Duke University as Associate Professor of Surgery at a time when the brash, young medical school had only two other African American professors on faculty with Akwari being only the second on the academic tenure track. It was only a decade earlier that the hospital had desegregated its facilities.

Minority physicians routinely endured skepticism from patients, trainees, and colleagues regarding their professional qualifications, in ways that continue to linger today. He met the fair and unfair challenges to the legitimacy of his presence with a conviction instilled by his father, namely, that “all human beings breathe free air, thus, no human being is bigger or better than you are, because all are the same.”

Dr. Akwari could detect a whiff of suffering in patients and their families and ministered to them. Equally ardent about teaching, he thrived on having undergraduate, medical, and graduate students in his research laboratory and on his clinical service. Many were inspired by his conviction that a surgical career combined with the academic life was the most rewarding option in medicine. In his words: “It provided the privilege of teaching, operating and researching with the possibility of using one to support the other.”

Despite the fact that his surgical career was cut short after 17 years by illness, he published over 150 articles and book chapters, presented research at 73 national and international medical meetings, served for 15 years on Duke’s medical school admissions committee and for 12 years on Duke’s faculty governance Academic Council. He served on Duke’s Athletic Council and enjoyed close relationships with the coaches of women’s and men’s basketball, football, and wrestling. He was keenly interested in facilitating the studies of Division I athletes who aspired to medical careers. He opened his home to all, most importantly to students, and he hosted gatherings for other “first” African Americans at Duke.

In the 1980’s, he countered vocal opposition in the university on the validity of adding women’s and minority studies to the canon. He felt privileged that during his tenure on Duke’s Academic Council (1981-1993), the faculty voted to broaden Duke’s faculty tuition benefit program to include the children of staff, a signal commitment of the university to the academic mission of generational improvement.

A common excuse for failure to racially integrate academic surgical departments in the post-civil rights era was the absence of a pipeline.  Weary of the excuse, four surgeons, including Akwari, initiated the idea for the Society of Black Academic Surgeons in 1989. Akwari organized the first meeting, securing the Governor’s designation of Academic Surgery Month in the State of North Carolina. The keynote speech, “The Vanishing Black Male,” was given by Dr. John Hope Franklin with attendance at conference affairs by Mary Duke Biddle Trent Semans, Governor James Martin, Health and Human Affairs Secretary Louis Sullivan and North Carolina Mutual Insurance Company executives including president, William Kennedy.

Born in Aba, Nigeria to Theophilus Akwari, an export-import business owner, and Ngarasi Christiana Ukegbu, a shopkeeper, he was the eldest of eight and charged with the high expectations of his culture, as a result. When his home and family businesses were destroyed in Nigeria’s civil war, Dr. Martin Adson, a mentor in the performance of complex abdominal surgery, lent him the money, during his intern year, to re-roof the family home. He repaid the loan and, on a trainee’s salary, assisted all but one of his siblings in emigrating to the U.S. for their educations.  Each has contributed to his/her field and community in the United States.

A Quaker memorial Meeting for Worship will be held at Durham Friends Meeting located at 404 Alexander Avenue in Durham on May 23, 2019 at 6:00 pm.  It will be followed by an opportunity for all, whether in attendance at the Meeting for Worship or not, to visit with the family from 7:00-9:00 pm. An Episcopal service, officiated by the Rev. Stephanie Yancy, will be held at Duke University Chapel on May 24, 2019 at 11:00 am. A reception will follow at Kirby Horton Hall in the Doris Duke building at Sarah P. Duke Gardens.

In lieu of flowers, the family asks that contributions be made to Dr. Akwari’s church, St. Titus Episcopal Church, 400 Moline Street, Durham, NC 27707.

The Akwari family is under the care of Walker’s Funeral Home of Chapel Hill.  Please express your online condolence by using the tab below.