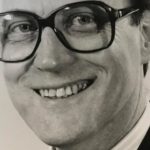 Peter Copeman, an avuncular and faintly Edwardian figure, had little knowledge of the celebrity of many of those he treated as a dermatologist. However, his neighbours in south London were sometimes surprised to see superstars and royalty such as Madonna and Diana, Princess of Wales, emerging from private consultations at his home in Clapham, southwest London. Among fellow doctors he was affectionately known as “Dr Spot”.

He also treated a great many children on the NHS and his contribution to the advancement of medicine was significant. He published more than 100 peer-reviewed articles on general medicine and dermatology, reporting original research from his own laboratory and from clinical teams that he managed.

His work included research on the pathogenesis of malignant melanoma, a potentially aggressive form of skin cancer. His pioneering work with others on cutaneous vasculitis, a group of disorders involving inflamed blood vessels in the skin, changed accepted medical thinking. He was also a leader in the introduction of immunofluorescence and electromicroscopy in dermatological research.

Peter William Monckton Copeman was born in London in 1932, the son of William Copeman, CBE, a pioneer in the field of rheumatology, and his wife, Helen (née Bourne). He came from a line of eminent physicians who inculcated an ethos of public service and a strong Christian faith. He was the third generation of his family to become a Fellow of the Royal College of Physicians. His grandfather, Sydney Copeman, had been a key figure in the refinement of Jenner’s vaccine for smallpox and in 1899 had developed a safer form of the vaccine that removed the significant threat of bacterial contamination from other diseases, including syphilis.

Young Peter was brought up in Hampstead, north London, and attended Rottingdean Preparatory School, East Sussex, from the age of seven. During the Second World War the school was evacuated to the Cornish countryside. Despite the privations of rationing, he enjoyed this period of his life, which gave him a lifelong interest in the natural world and in country pursuits.

He was sent to Eton College in the immediate postwar period, where he did well academically and was a noted rifle shot, captaining the Eton Shooting Eight at Bisley in his final year. He was on course to achieve a record score in the Public Schools Ashburton Shield but, requiring a bullseye from 500 yards with his final shot, he hit the required mark — on his neighbour’s target.

After undergraduate medical studies at Cambridge, he qualified at St Thomas’ hospital, London, where he started work specialising in ophthalmology. He was then poached by the dermatology department after writing a research paper on styes for The Lancet. He was awarded a gold medal for his doctorate on vasculitis and received Membership of the Royal College of Physicians (MRCP) in January 1962 when the pass rate was only 5.8 per cent.

Copeman’s early research work on vasculitis took him to the Mayo Clinic in Minnesota in the United States, where he worked alongside Terence Ryan and the eminent Dutch dermatologist Rudi Cormane. He was appointed consultant physician at Westminster Hospital in 1965. He arrived there at a time regarded as a golden age, dominated by figures such as Sir Richard Bayliss, Roger de Vere, Charles Westbury and Harold Ellis. Colleagues recalled a doctor who was the quintessence of a teaching hospital consultant, “erudite, well read, well-bred and steeped in the classics”. He always wore his spotless white coat over a waistcoat and tie, striding the wards with a crocodile of registrars, students and nurses trailing behind. He relished the challenge of difficult diagnoses and brought to his work a knowledge of medical history as well as Latin — and expected his students to learn the stories behind every eponymous syndrome.

His greatest professional satisfaction came from his clinics in the children’s hospital, where he took a gentle approach to the suffering of his youngest patients. He also gave his expertise pro bono to St Luke’s nursing home for the clergy, and regularly waived private fees for those too poor to pay.

Patients flew in from all corners of the globe for treatment at Copeman’s private practice in Sloane Street, and in the 1970s and 1980s he regularly visited Qatar as the guest of the emir to help to modernise Qatar’s medical services.

He was church warden and trustee at St Mary’s, Bourne Street, an appreciator of the arts and a connoisseur of fine wines. As chairman of the wine committee of the Athenaeum, he combined both interests by persuading Eduardo Paolozzi to design the club’s wine labels.

Copeman also cultivated eccentric interests, most notably in the Temple of Philae at Aswan in Egypt. His home was decorated with more than a dozen paintings of the temple from different angles and periods, but, on the only occasion that he visited Egypt, he found it flooded by the Aswan Dam waters with only the roof visible.

He met Lindsey Brims, who became his wife, at a Scottish ball at Sorn Castle, Ayrshire, in 1972. She was the daughter of a civil engineer, had grown up at Heddon Hall in Northumberland, and was 16 years his junior. They married the next year, when he was 40, and had four children: Mary, who is a childminder; Louisa, a lawyer; Caroline, a university law lecturer; and Andrew, who is a master at Latymer Upper School in west London.

Copeman enjoyed field sports and was an active and founder member of the Game Conservancy. In the 1980s he bought the 200-acre Abshiel estate near Morpeth, Northumberland, and set about trying to support the regeneration of the British grey partridge. His re-landscaping of the estate, with hedgerows for wildlife corridors and a series of ponds, was recognised when he was made a finalist in the Laurent-Perrier conservation awards. He will be most remembered, though, for his work improving the lives of people with debilitating skin conditions.

Obituary courtesy of The Times.