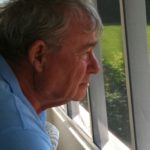 Pete was born on May 9, 1943, in Denver, Colorado while his parents, Joseph and Doris Schwab were fulfilling duties at Lowry Air Force Base. His early childhood years were spent enjoying the winters of St. Paul, Minnesota. At ten years old, the family relocated to Oak Park, Illinois beginning his suffering loyalty to the Cubs. He attended Oak Park River Forest High School where he excelled academically and enjoyed extracurricular activities ranging from the wrestling team to the A Capella Choir. He then attended Miami of Ohio in Oxford, Ohio where he was a Brother in the Sigma Alpha Epsilon fraternity. Pete was extremely fond and respectful of the written word (never ending a sentence in a preposition), especially liking poetry. He double-majored in English and Biology. After considering a career as an English teacher, his Biology major won his passion and he then attended the University of Illinois Medical School. Just before graduation, he made the best decision of his life marrying Jane Hasbrouck in 1969.

Through the University of Cincinnati he completed his medical internship at Cincinnati General Hospital. He then completed his surgical training at the Mayo Clinic in Rochester, Minnesota. Through the Berry Plan he was stationed in Memphis, Tennessee and was honorably discharged as a Lieutenant Commander in the Navy. After a couple of years practicing medicine in the hills of Bluefield, West Virginia, much to the happiness of his wife and now four children he moved the family back to the Midwest settling in Galesburg, Illinois to join Cottage Hospital. At this point in his career, he had attained the status of Fellow at the American College of Surgeons. Recognizing the need for better instrumentation and protocol, he spearheaded the creation of making Cottage Hospital a designated Level II trauma center, thus truly saving many lives in the area.

While always having medicine and his patients at the forefront of his mind, he had many hobbies. Pete loved nature and practiced husbandry. He was a Master Gardener and could be found randomly testing the pH level of the soil in his yard. His great escape was to join his friends at the Prairie Rod and Gun Club near Lomax, Illinois in the attempts to collect the protein for his duck gumbo. The camaraderie, lack of telephone utilities, clear bright stars, and calming effect of a nice Bourbon on the rocks recharged him to have the ability to get back to his patients and family with a clear head. He was a member of Ducks Unlimited and Pheasants Forever and many other land and animal conservation groups.

Pete engulfed his hobbies by steadfastly studying and taking notes on the chosen subject. The area he hunted on the Mississippi River was the same hunting grounds of the Native American, Black Hawk, and Pete knew the history of the man and his Sauk tribe intensely. When he took up the hobby of beer brewing, notebooks were filled with handwritten pages of trials and errors as much as the house was filled with the aroma of hops and barley. When he noticed the graceful movement involved in fly-fishing, he soon erected a fly-tying work station in the living room-much to the aversion of the family enduring the smells of squirrel pelts and pheasant hackles to pull from. Pete was an avid patron of the YMCA and volunteered his time to the Galesburg Youth Athletic Club as the ring doctor during youth boxing matches.

His lifelong exposure to different musical influences was apparent in his enviable LP collection. He supported the Rail City Blues Society and never missed the weekly musical and theatrical radio show A Prairie Home Companion-often shutting down any conversation and showing blatant annoyance of telephone rings. He and his wife retired to Fontana, Wisconsin where he continued his hobbies by being active in the Geneva Lake Conservancy.

Pete is survived by Jane Schwab, Jenny & Jason Ferrara, Joe & Cristina Schwab, Patty & Joe Kimbro, Mary Jane Schwab and seven grandchildren. As we cannot hold a gathering in his honor during this pandemic, we think Pete would prefer you to simply take a walk in the woods

In lieu of flowers, any volunteering of time or offerings would be greatly appreciated to Ducks Unlimited, Pheasants Forever, Native American organizations, the YMCA, the Galesburg Youth Athletic Club, or the Geneva Lake Conservancy.