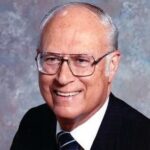 Phil was born to Marion Manning and Phil R. Manning, Sr. in Kansas City, Missouri. He completed both his undergraduate and medical degrees at USC and started his residency training at the VA hospital in Van Nuys where he met his future wife, Mary. After they were married in 1949 and the birth of their first child, Carol, they moved to Rochester, Minnesota, where Phil completed his fellowship at the Mayo Clinic. His son, RJ, was born several years later while he was in the Air Force, stationed in Illinois. After returning for a faculty position at the USC School of Medicine in 1954, Phil would become a Professor of Medicine, the Associate Dean for Continuing Medical Education, and the Associate Vice President for Health Affairs. During his 48-year tenure as faculty, he led numerous courses and was honored as USC Medical Alumnus of the Year in 1974. A pioneer in the field of Continuing Medical Education, he co-wrote a book on this topic in 1989, entitled Medicine: Preserving the Passion that emphasized practice-linked education.He was a lifelong USC football fan who attended games for many decades, initially with his father and later with his son, RJ. An avid tennis player, he competed with nationally ranked athletes in high school and continued to play the sport during his retirement. He also had a love for adventurous travel, visiting all 7 continents and the High Arctic. He enjoyed a trip to Iceland just weeks before passing away peacefully at his home in Corona del Mar at the age of 98. Phil will be fondly remembered for his infectious laugh, kindly manner, and zest for life. He was preceded in death by his wife, Mary, and is survived by his children, RJ and Carol Manning, his grandchildren, David Boettger and Linda (Daniel) Goodman, and great granddaughter, Adeline Goodman.Memorial services will be held at 10am on October 29th at O’Connor Mortuary – 25301 Alicia Pkwy, Laguna Hills, CA 92653. The burial will follow at 2pm at Miramar National Cemetery – 5795 Nobel Dr., San Diego, CA 92122. O’Connor Mortuary (949) 581-4300 www.oconnormortuary.com