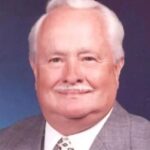 Stevens Point – Dr. Philip (Phil) Kearny Hacker, 86, of Stevens Point, a beloved husband, father and grandfather, esteemed Stevens Point surgeon and naval veteran, passed away peacefully on the morning of December 5, at Touchmark in Appleton, Wisconsin, surrounded by his family. A southern gentleman at heart, Phil was a man who made a profound impact on everyone he met. He took great interest in others and the stories they had to share. To those who knew and loved Phil, he will be remembered for his love of family, storytelling, reading, history and music, and his great pride in his long medical career and naval service.

Phil was born on March 6, 1935, in Pensacola, Florida, to Edwin and Katherine (Kearny) Hacker. He was the youngest of their three sons. Throughout his childhood in Pensacola, he excelled in school and spent many summers traveling with his mother across Europe when she worked as a tour guide. He graduated from Pensacola High School in 1952.

He went on to earn two degrees from the University of Florida on an athletic swimming scholarship, including a bachelor of science degree in biology and chemistry and a bachelor of arts degree in history in 1957. Phil then earned his doctorate degree from Tulane University School of Medicine in 1961. After completing a one-year internship at St. Francis Medical Center in Honolulu, Hawaii, Phil was selected for a urology residency at Mayo Clinic in Rochester, Minnesota, which he completed in 1966. During his residency, he also earned a master’s degree from the University of Minnesota.

Following his residency, Phil moved to Stevens Point, Wisconsin, and joined the Rice Clinic, becoming the city’s first urologist surgeon. He temporarily left his practice in 1968 to serve in the Vietnam War as an officer and surgeon at the Naval Hospital in Portsmouth (now Naval Medical Center Portsmouth) where he performed countless surgeries on wounded soldiers returning from battle overseas. During his time serving in the Vietnam War, he was selected to go to Harvard Medical School to further his studies in spinal cord injuries. He returned to Stevens Point after his military service and resumed his practice at the Rice Clinic. In 1984, Phil was one of the founders of the Academy of Letters and Science at the University of Wisconsin-Stevens Point. As a physician, he cared for many local residents until his retirement in 1999.

In addition to his outstanding academic and career achievements and naval honors, Phil was an active member of the Masonic Lodge, American Legion Post 6, Eske Lodge and Stevens Point Country Club.

While his many achievements and activities were important to him, his greatest passion was for his family. He married Mary (Thompson) in 1979 and they recently celebrated their 42nd wedding anniversary together. In his spare time, he loved spending time with Mary, his children and grandchildren at the family cabin on Sunset Lake.

In lieu of flowers, the family will create a memorial honoring Phil at later date.

A visitation will be held at St. Paul’s United Methodist Church, 600 Wilshire Boulevard in Stevens Point, on Saturday, December 11, from 11 a.m. to 2 p.m. This will be followed by a funeral service and military honors. A private interment for the family will be held at a later date.