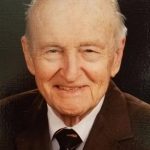 Roland Drew Miller, 95, of Rochester, the son of Roland B. Miller and Fern Drew Miller, died on Saturday, April 15, 2017, at Saint Marys Hospital with his daughter-in-law, Anne Miller, and granddaughter, Cynthia Fowler, by his side.

Drew was born in Chicago and grew up in Indiana. The son of two educators, Drew held education in the highest regard. He graduated from George Rogers Clark High School in Hammond, Ind., in 1939, and after high school, attended DePauw University where he was a member of Beta Theta Pi fraternity and Phi Eta Sigma, a scholastic honor society. In 1942, he graduated from DePauw and attended Northwestern University Medical School from 1942 to 1945, earning his Doctor of Medicine.

From 1945 to 1948, Drew was a medical officer at the U.S. Naval Hospital in San Diego aboard the USS Rankin. During his time in the Navy, he was also stationed in Tsingtao, China, and Inyokern, Calif. After leaving active duty, he served for 21 years in the Naval Reserves and retired as a Captain.

He was a member of the American Board of Internal Medicine, chairman of the Pulmonary certification board, among numerous other professional clinical and research organizations. Drew published more than 100 articles, abstracts, and chapters in scientific publications and was first listed in Who’s Who in America in 1964. However, perhaps his greatest professional accomplishment was the affection his patients had for him.

Drew was also active in his home communities, whether living abroad, in Rochester, or in Naples, Fla. He was a U.S. Department of Health and Welfare visiting consultant to the United Christian Hospital in Lahore, Pakistan, and the Hospital for Chest Diseases in Belgrade, Yugoslavia (now Serbia). In Rochester, he was founding president of the Rochester Council of Churches representing Christ United Methodist Church.

Drew retired from Mayo Clinic after 40 years of service, but volunteered as a physician and member of the executive committee at the Senior Friendship Health Center for indigent patients in Naples. In 2008, Drew was awarded the Volunteer of the Year award from his alma mater, DePauw University.

Drew met his late wife, Elizabeth “Betts” Lancaster, at DePauw University. They married in 1943 and were married for 52 years until Betts’ passing in 1995. Drew and Betts had three children: Judy, Cheri and Randy. After fighting a brief, valiant battle against cancer, Randy passed away on Jan. 1, 2017.

Drew’s passions included his enjoyment of the outdoors. He meticulously cared for the Miller family cabin near Park Rapids, Minn., and a multi-acre evergreen tree farm outside Rochester. He enjoyed horseback riding, waterskiing, fishing, and maintaining the land. Drew and Betts also enjoyed travel, visiting all seven continents. Drew was an exceptional piano player, easily playing classical favorites by ear.

Drew was preceded in death by his wives, Betts and Ruby, and his son, Randy.

A memorial service will be held at 11 a.m. Saturday, April 22, at Christ United Methodist Church with a visitation starting at 10 a.m.

Memorial donations may be made to Mayo Foundation for Medical Education and Research.

Ranfranz and Vine Funeral Home is assisting the family. Online condolences may be made at www.ranfranzandvinefh.com.